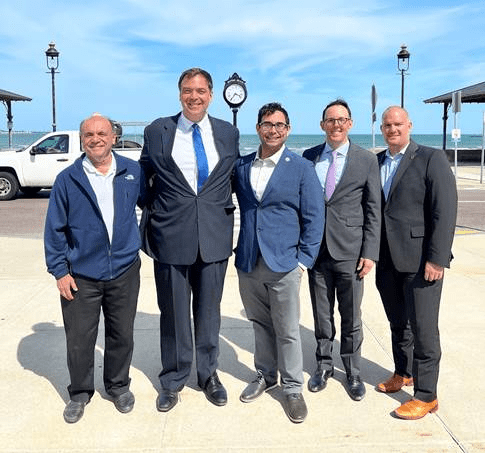 REVERE – Mayor Brian Arrigo announced last week on Revere Beach the new Revere Office of Travel and Tourism, Next Stop Revere: By Land, By Sea, or T. Subsequently, Mayor Arrigo announced Charlie Giuffrida, currently the Assistant Director of the Revere Parks and Recreation Department, as the new director of the department.

“With Memorial Day on Monday and the groundbreaking at Suffolk Downs, now is the time to capture the momentum. The new office of Travel and Tourism, Next Stop Revere: By Land, Sea, or T, will capture millions in revenue from visitors to Revere Beach,” said Mayor Brian Arrigo. “The office will promote all of the characteristics that make our city great and act as a connector to support our businesses in reaping the benefits. Year-round event programming – from ice skating to kite surfing, and holiday markets to lighting installations – will make Revere the place to be, no matter the season.”

Next Stop Revere is the city’s first intentional initiative to capture millions more in revenue from visitors to Revere Beach. The office will promote all the characteristics that make our city great, and act as a connector to support our businesses in reaping the benefits.

“Tourism is Massachusetts’ third largest industry and the next double digit growth sector for Revere’s economy, which is why it’s a central investment priority in the American Rescue Plan Act,” said Director of Travel and Tourism, Charlie Giuffrida. “At its core, the Tourism office is the marketing arm of the city; dedicated to showcasing Revere as a destination for local, regional, and international tourists. I grew up in this area and even I’m astounded by how much there is here; There’s so much to do I think I’ll have a great challenge and a great opportunity here to really package the city in a way that hasn’t been done before.”

Throughout the course of Mayor Arrigo’s administration, the City has opened more than 400 hotel rooms, with 110 in the permitting phase, and another already planned for Suffolk Downs.   That, paired with the 61 new restaurants and cafes opened since 2016, has brought millions of dollars of tax revenue to our city. The Travel and Tourism office will only further these opportunities by working with community partners, stakeholders, and those within the restaurant and hospitality industries. With plans already laid out for Suffolk Downs, Squire Road, and the Riverfront District Project, the City of Revere will flourish in growth throughout the next decade and beyond, bringing a better quality of life for our residents and visitors.

The Next Stop Revere team has plans to work with organizations such as FMP Productions, who have historically helped plan and organize the Revere Beach Partnership’s International Sand-Sculpting Festival, which brings close to half a million visitors to our City every summer.   The Travel and Tourism Office already has creative programming for the rest of 2022, with plans to continue with events during every season – including holiday lighting installations and winter markets.

Both residents and visitors will be able to enjoy the following events this year:

Winter Festival of Lights – Planned for December 2022 on Revere Beach

All of these events will be posted on www.revere.org/calendar. We encourage you to follow the office’s new social media platforms, including both Facebook and Instagram. More information, including the office’s travel guide and website, will be published later this summer.