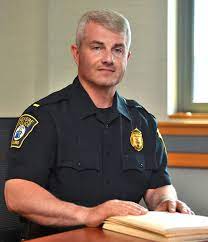 For some city departments, the yearly foray before the City Council’s Ways & Means Subcommittee during budget season is an opportunity to update the council on past successes and future goals. This was especially true Monday night for the Police Department, with Police Chief David Callahan presenting an essentially level-funded budget. Callahan highlighted a number of the department’s achievements in Fiscal Year 2022 and laid out a healthy number of goals for FY23, with a focus on increased training and community outreach.

Over the past year, Callahan said, the department completed a review and update of 80 percent of its policies and procedures as part of the effort to keep in line with the police reform law passed in 2020. Training over the past year focused on updates on state law as well as a focus on mental health training, implicit bias, use of force and de-escalation training.

The department purchased 10 solar-powered speed signs to help assist with speeding issues in thickly settled neighborhoods. “This is a constant problem we have in the city, and it seems like it’s not just here in Revere; we are all flooded with the same complaints,” Callahan said.

Ward 2 Councillor Ira Novoselsky advocated for more of the speed signs in his neighborhood, noting he has asked for them for several years and still only has one in his ward.

Other highlights of the past year according to the chief include the upgrading of two-way radios to digital units with improved coverage, and expansion of the Police Athletic League programs for the city’s youths.

The department is also in the process of releasing a new app that includes a 411 anonymous tip line. “I think that will be very beneficial to the city and the Police Department,” said Callahan. “I spoke to other cities near us that have it, and they said it has been very successful for getting information about some very serious crimes.”

Other goals for FY23 include expanded crisis intervention training for officers and the creation of a new behavioral health unit within the Police Department. The long-term goal of the unit is to increase an equitable approach to public safety and public health outcomes. The department will hire for three civilian positions to staff the new unit – a public safety case worker, a program coordinator and a behavioral health clinician. “We have a lot of public health issues with homelessness, substance abuse and people with mental health issues that may not be getting addressed,” said Callahan. “We are hoping to get help for people in need and navigate them to the resources they need.”

City Council President Gerry Visconti asked about the department’s current staffing levels and if Callahan believes there is a need for more school resource officers. Callahan said he would like to see the department come up to a full complement of 110 active duty officers from the approximately 102 on the roster now. However, Callahan noted that because of problems with getting recruits into the police academy and a lower interest in the position than in the past, it has been difficult to hire new officers. He also agreed that there is likely a need for at least one or two more school resource officers.