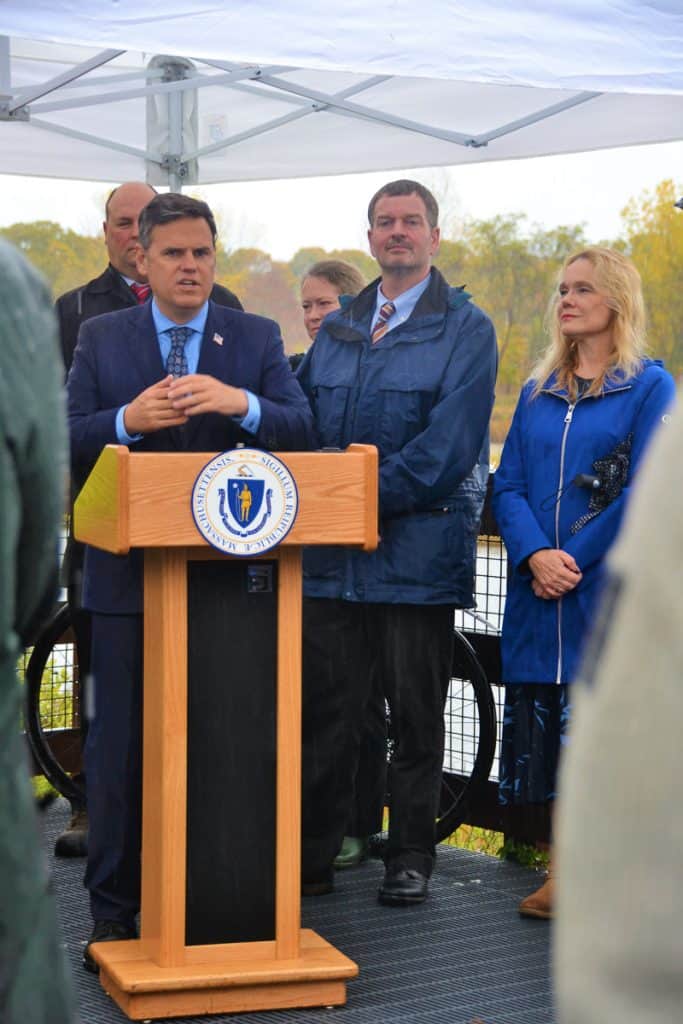 Despite the heavy downpour, a stalwart group celebrated the ribbon cutting Wednesday (Oct. 26) morning on the bike trail between Lincoln Avenue and Central Street. The Northern Strand Community Trail – a project that was 30 years in the making – reached a milestone this year when sections connecting Saugus with four cities (Everett, Lynn, Malden and Revere) were completed, enabling bicyclists and walkers access from inland to the coast. Many people of all ages have been enjoying the bike trail for a wide range of reasons: recreation, exercise, nature watching, and simply as a safe and convenient way to get around town for errands, work, school and appointments.

“I would like to thank Governor Baker, Lieutenant Governor Polito, and Secretary Card from the Executive Office of Energy and Environmental Affairs for their support of this important regional initiative,” Saugus Town Manager Scott C. Crabtree told the raincoat-clad gathering on Wednesday.

“I would also like to commend the Cities of Revere, Malden, Lynn and Everett, as well as Bike to the Sea, for their partnership and dedication in turning this multi-community effort into a reality,” Crabtree said. “In addition, I would like to thank all of the town’s volunteers and officials who contributed their ideas and suggestions, which strengthened the community vision for this important recreational staple.”

The nonprofit Bike to the Sea has been working with town officials and many volunteers to make this connecting path a reality. Among those celebrating the project’s completion with Town Manager Crabtree were the mayors of Everett, Lynn, Malden and Revere – top area elected officials who are connected to the bike trail project.

Paving that began in 2020 now allows people to bicycle on paved paths from Everett to Lynn, mostly along the original Saugus Branch Railroad right of way. There are signposts showing mileage, informational signs and crossing lights at many grade crossings as well as benches and bridges to make using the trail comfortable and pleasant.

The trail – spearheaded by Bike to the Sea, Inc. in 1993 – is built in a continuous 7.5-mile stretch through Everett, Malden, Revere and Saugus. It also includes Lynn.

The Baker-Polito Administration celebrated the completion of more than 10 miles of the Northern Strand Community Trail, which is a shared use path that traverses parts of the Cities of Everett, Lynn, Malden and Revere and the Town of Saugus along the rail bed of the former Saugus Branch Railroad. The $15.5 million project by the Executive Office of Energy and Environmental Affairs (EEA) was completed utilizing funding from the Gateway City Parks Program.

“Projects like the Northern Strand Trail serve as critical assets that link communities and residents across the Commonwealth together,” Governor Charlie Baker said in a statement issued by his office on Wednesday (Oct. 26). “Through the MassTrails team, our Administration has been proud to collaborate across state government and with municipal partners and trail advocacy groups to advance these projects that bring numerous environmental, recreational and transportation benefits to communities in Massachusetts.”

“We were pleased to fund the Northern Strand Trail, and to partner with Everett, Lynn, Malden, Revere and Saugus to advance this critical project,” Lieutenant Governor Karyn Polito said in a statement also issued by the Governor’s Office on Wednesday.

“The Northern Strand Trail will provide benefits not only to the residents and businesses along the trail, but also to visitors and those living in the surrounding region.”

The trail corridor connects neighborhoods, links residents to business districts, provides access to regional assets, such as the Lynn Shore and Nahant Beach Reservations of the Department of Conservation & Recreation (DCR), serves as a critical component of the East Coast Greenway and improves the quality of life for the region’s residents.

Helping to make the region “green”

The trail also has transportation and greenhouse gas emissions benefits. Provision of a practical, safe route of relatively short distance between major cities helps to encourage walking and biking as an alternative to driving, thus reducing emissions and helping the Commonwealth comply with the Global Warming Solutions Act.

“Safe and fun access to the outdoors is a priority of the Baker-Polito Administration, and I am pleased that this project provides residents with a great opportunity to get some exercise and enjoy the Commonwealth’s natural resources,” state Energy and Environmental Affairs Secretary Beth Card said. “Significantly, rail trails like the Northern Strand Trail also provide commuters with the option to leave their cars behind, which reduces the release of harmful carbon emissions and assists in the Commonwealth’s efforts to achieve Net Zero in 2050.”

The construction of the Northern Strand was supported by the work of the Interagency MassTrails Team, which is composed of staff from EEA, the Massachusetts Department of Transportation (MassDOT) and DCR. The purpose of the team is to help develop a unified vision for a trails network and translate that into strategic investments, policy innovations to facilitate development of trails, and partnerships with municipalities and other organizations. The Northern Strand trail project is a direct result of the group’s “one team, one plan, one vision” approach to advance multi-use trails across the Commonwealth.

“Shared use paths give people a safe, comfortable, and convenient option to walk and bike for everyday trips without relying on a car to get to destinations,” Transportation Secretary and CEO Jamey Tesler said.

“The benefits are countless when it comes to active travel for wellbeing, public health, reducing pollution, and supporting local businesses. Whether people are commuting to work, going shopping, or just out for fun, more than 100,000 people of four gateway cities now are within ½ mile of the Northern Strand,” Tesler said.

Following work conducted by many partners, including the longtime advocacy of Bike to the Sea, trail segments were in various stages when EEA took on the project. EEA’s partners on the project included the five communities, with Revere acting as the contracting entity during the construction phase. The project enhanced an already paved trail in some communities, such as upgrading road crossings to make them better and safer locations. In other communities where the rails were still in place the project involved all aspects of trail design, permitting and construction. Additionally, the trail was designed by the team of Brown, Richardson, and Rowe, landscape architects, and Stantec Consulting engineers, who also administered project construction, and built by the R. Zoppo Corporation.

“After nearly 30 years of tireless advocacy, Bike to the Sea is thrilled to celebrate the official ribbon cutting for the Northern Strand Trail,” said Jonah Chiarenza, Executive Director of Bike to the Sea.

“We thank the Commonwealth of Massachusetts for this historic investment in recreation and active transportation,” Chiarenza said.

What the mayors say about the bike trail

Design work for the balance of the Northern Strand Extension in Lynn, which will travel along South Common Street, Market Street and the Carroll Parkway before reaching Nahant Beach, is at the 75 percent stage. Funding for construction is programmed on MassDOT’s Transportation Improvement Program for FY24, which means that work should begin in the fall of 2023 and end in the summer of 2025.

On the southern end of the Northern Strand, the City of Everett has been building the segment from West Street to the Mystic River. In addition, DCR is completing the design and permitting of the Mystic River Bicycle and Pedestrian Bridge. Construction funding has been set aside for bridge work to begin in the summer of 2023, with construction expected to take about two years. The completed project will result in a transportation and recreation corridor of about 11.5 miles from the Somerville side of the Mystic River at Assembly Row to the beach at the Nahant causeway.

“We’re thrilled to see the expansion of the Northern Strand and to have Lynn added to the shared use path,” Lynn Mayor Jared Nicholson said. “This initiative will contribute to our goals of increasing connectivity and accessibility to transportation and open, green space throughout the City and beyond,” he said.

Everett Mayor Carlo DeMaria called the completion of the Northern Strand Trail “a transformative multimodal transportation investment for the communities north of Boston that have been historically underserved by our transportation network.” “I applaud this achievement by the Baker administration, welcoming the Cities of Revere, Saugus and Lynn into the trail network, and look forward to the full completion of the path when the Mystic River bridge opens in the coming years,” DeMaria said.

Malden Mayor Gary Christenson called the project a precedent-setting development for his community. “There isn’t anything that has transformed our city like the Northern Strand Community Trail has done,” Mayor Christenson said.

“From providing a safe space to bike, run, and walk to creating a place for public art to being a place for families to come together, the trail has achieved all that we had hoped for and it has also proven that hard work is still the key to success,” Christenson said.

“Thank you to Bike to the Sea for their 20 years of dedication to making this invaluable project a reality,” he said.

Revere Mayor Brian Arrigo called the Northern Strand Community Trail “a shining example of regional collaboration and the commitment of the Commonwealth to enhance the quality of life for the residents of our urban communities.”

“Thanks to the hard work of our local and state partners, the residents of Revere will enjoy this trail for generations to come and have enhanced access to open space and outdoor recreation,” Mayor Arrigo said.

State Senator Brendan Crighton (D-Lynn) hailed the trail project as a great connector of all the communities in the region. “The Northern Strand Trail continues to bring people together both within and across communities,” Crighton said. “We are thankful for this project, which is a major investment in our region’s public health, economy, and emissions reduction efforts.”