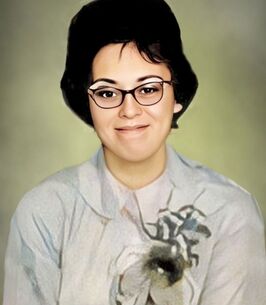 Of Revere. Died on Tuesday, August 30th unexpectedly at her residence in Revere, she was 84 years old.

Barbara was born and raised in East Boston to her late parents Nicholas & Mary (Shiroky) DiPalma. She was educated in Boston Public Schools and was an alumnus of the Girls Fitton Class of 1955. Following high school, Barbara worked for New England Tel & Tel in an administrative role. On January 14, 1961, she married her husband John P. Aylward. The couple moved to Revere, where they raised their family. She was the proud & loving mother of her three children. Barbara cherished her role as wife & mother. Barbara later returned to the workforce when her children were grown, at Shawmut Bank in Boston, where she worked in the Fraud Investigation Department. Her career spanned over 25 years. Barbara enjoyed her time spent at home with her husband, enjoying her family, and above all, her grandchildren, whom she loved unconditionally. She truly enjoyed cooking for her family and enjoyed feeding people. She was an avid reader, and loved reading a good book. Her presence will be greatly missed, but her memory and love she bestowed on her family will live forever.

She is the beloved wife of over 61 years to John P. “Jack” Aylward of Revere. The loving mother of John P. “Jay” Aylward and wife Heidi of Westminster, CO., Kelly Aylward of Revere and Paula DiMartino her late husband Salvatore of Winthrop. The cherished grandmother of Meaghan Aylward of Westminster, CO., Nicholas DiMartino and Catina DiMartino both of Winthrop. She is the treasured sister of Carol Forti and husband William J. of Camden, ME. Also lovingly survived by many nieces, nephews, and grandnieces and grandnephews.

In lieu of flowers remembrances may be made to the American Cancer Society; 30 Speen St. Framingham, MA 01701.