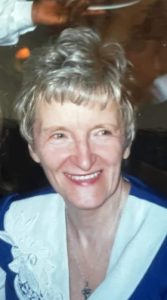 Of Revere. Passed away on Sunday, September 11th at the Newbridge on the Charles Nursing Facility.  Muriel died peacefully and was found in a manner that shows her true spirit; she was found kneeling by her bedside, all showered and done up as if going to church-undoubtedly praying to Jesus, she was 94 years old.

Muriel was raised and educated in Everett and later lived in Malden at the Heritage Senior Building before living at the Jack Satter house on Revere Beach.  She was formerly married to Harold P. Roos, with whom she began her family. She was a devoted housewife and mother of three daughters. She worked various jobs while raising her girls, later holding a job she adored as a Customer Service Representative at the Bible Gift Shop located in Maplewood Square in Malden a place for her to evangelize to others when she wasn’t busy taking the train into Downtown Crossing to tell people about Jesus. Muriel was a woman with profound faith, known by many as a “prayer warrior”. She would often pray for people and minister to the homeless and help encourage people who were downtrodden by spreading the Gospel of Jesus Christ. Her family looked to her for strength, wisdom, & guidance because she was a strong, loving, and faithful mother, grandmother, and friend.  Muriel was a member of many churches and a devout supporter of ministries and outreaches. She never missed an opportunity to usher someone up to an “Altar Call”-to give themselves to the Lord. Having met Muriel means having been asked, “Do you know Jesus?”.  As the trumpets sound off in heaven for the arrival of a new Queen Muriel, let us all remember one of her favorite verses, “16 For God so loved the world that He gave His only begotten Son, that whoever believes in Him should not perish but have everlasting life. 17 For God did not send His Son into the world to condemn the world, but that the world through Him might be saved.” (John 3:16-17)

Muriel always carried a $1, $5, or $10 bill for someone in need on the street, perhaps we can all add that to our pockets in remembrance of Muriel and pass on her spirit of caring for those in need.

In lieu of flowers, remembrances may be made to Glendale Christian Lighthouse Church, 701 Broadway, Everett, MA 02149.