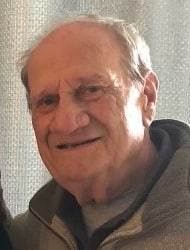 Of Revere.  Died at the CHA Everett Hospital, with his family by his side following a brief illness.  He was 90 years old.  Salvatore was born in Mineo, Sicily, Italy. He was raised & educated there. He was married to his wife Josephine (Cardello) in 1956. He was a proud father of his two daughters, and in 1966 they traveled from Italy to the United States, settling in Revere. When Salvatore arrived here in the United States, he began working at Schraffts Candy Co. in Charlestown, before starting his own painting business, where he worked very hard & diligently to provide for his family. He would later work in the produce department in Cerratani’s for several years before retiring, almost 30 years ago at the age of 60. He enjoyed spending time with his children, grandchildren & great grandchildren.

Family & friends were invited to attend Visiting Hours on Friday, October 21st in the Vertuccio & Smith Home for Funerals in Revere.  A Funeral Mass was celebrated in the Immaculate Conception Church, Revere followed by interment in Woodlawn Cemetery, Everett.