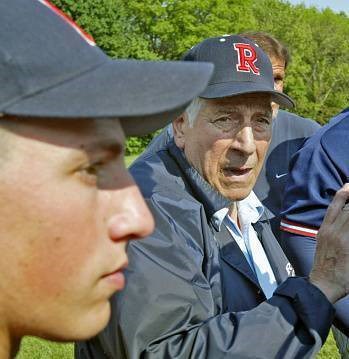 Longtime Revere baseball coach and educator Al Blasi will be honored with his name on the new home dugout at the baseball field at the Revere High School baseball field. Monday night, the City Council unanimously approved the motion introduced by Councillors Patrick Keefe and Marc Silvestri to name the dugout after Blasi, who died in 2014 at the age of 81.

“I did put this in in conjunction with Councillor Silvestri, who is very much in favor, and he has been working with the family of Mr. Blasi, who I didn’t have the honor of being coached by, but half of Revere did,” said Keefe. “He was an educator as well, and he has left a lasting impact.”

Blasi compiled more than 400 victories and won five league titles from 1964 to 2007. He was a charter member and past president of the Massachusetts Baseball Coaches Association and a member of its Hall of Fame. He also taught history and social studies at the high school.

“Finding out that there we are going to be building some official dugouts at the high school field, I thought it would be very fitting to name the home dugout in honor of Mr. Blasi,” said Keefe.

In addition to his time in the schools and on the diamond, Blasi was a veteran who served in the U.S. Army in the 1950s.

“Mr. Blasi is a legend in the city of Revere, and several of us had the honor of to be taught by him and several coached,” said Silvestri. “The family wanted to do a memorial sign for his veteran’s service, and I thought we should do something more considering the years of service he has put into the youth of our city.”

Ward 1 Councillor Joanne McKenna said she taught along Blasi at the high school, and that Blasi touched the lives of thousands of Revere students. “This is a great honor, and I am so happy that this happened,” said McKenna.

City Council President Gerry Visconti noted that the high school dugouts are being built by students from Northeast Metropolitan Regional Vocational High School, adding that he hopes that the partnership between the school and city on similar projects continues.