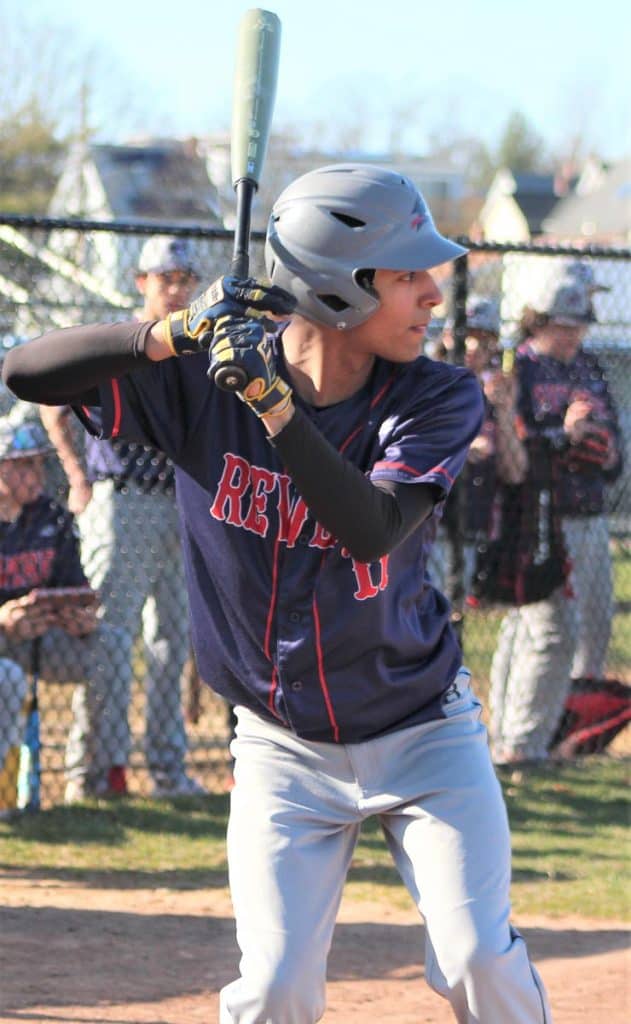 Having to play three road games in three consecutive days is a tough task so early in the season. But the Revere High School baseball team came out of it in pretty good shape. The Patriots emerged victorious in two of those three contests to sit at 3-2 on the early season.

No doubt, last Monday’s tight 5-4 win at Medford was the highlight of the stretch. Revere scored the winning run on a wild pitch that brought home Mike Popp, who would go on to earn the win in relief. Popp pitched out of a bases-loaded jam in the sixth inning and struck out the side in the seventh to close it out.

Starter Kyle Cummings had a strong outing. He hurled five-and-a-third innings, surrendered just two earned runs and fanned eight hitters. Another key moment came in the top of the fifth inning when Andrew Leone drilled a single to bring home a run and even the game at 4-4.

Wednesday’s victory at Chelsea ended after three innings, as the Patriots rolled to a 26-2 triumph. Giancarlo Miro had a big day, swatting three hits, including a triple, and driving in four runs. He was helped along by Chris Cecca with four hits (two of them doubles) and two RBI, Juan Londono with a double and four RBI and Popp with three runs driven in. Brendan Sack and Bobby O’Brien each added two RBI in the victory, which got Revere back on the winning track after an 11-4 non-league defeat at Swampscott on Tuesday.

In that loss, Miro launched a two-run homer that briefly put the Patriots ahead 2-0 in the top of the first inning. From there, though, the host Big Blue took control by responding with four runs in the bottom of the frame. Swampscott added seven more tallies before it was over while the Patriots could only tack on two more runs.

Miro was the starting pitcher before being relieved in the first by Domenic Boudreau, who pitched three frames. Ollie Svendson then hurled the final three innings for Revere.

Revere Head Coach Mike Manning told the press after the Swampscott game that he witnessed several encouraging things despite the loss. “We hit some balls really hard but, unfortunately, they didn’t find holes and that happens sometimes,” he said. “We’ll build off of the positives and continue to work on the things we missed in practice.”

Revere moves on to play 10 a.m. home games against Malden on Monday, April 18, and Everett on Wednesday, April 20.