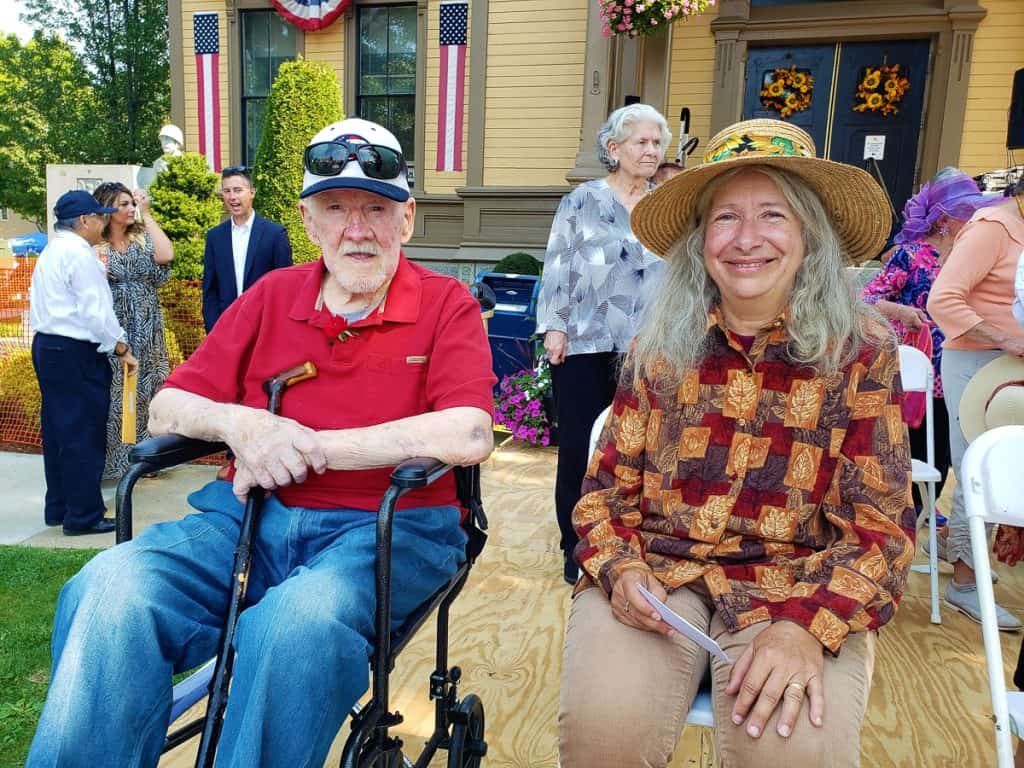 No living person in Saugus has written more words about the history of his hometown than 95-year-old Saugus historian and book author Tom Sheehan – a Charlestown native – who came to Saugus in the second grade and developed a great passion for reading and writing: mostly about Saugus people, places and events. The 58 books he’s written have focused on his favorite subject – Saugus.

Few native Saugonians have done as much over the last decade to promote the history of Saugus as Laura Eisener, who has served as president of the Saugus Historical Society over that time. Even in her weekly column – “Saugus Gardens,” which appears in The Saugus Advocate – she incorporates some town history about the trees, plants and flowers around town and the people who grow them.

The two Saugus High School graduates have dedicated untold volunteer hours collectively to spotlight the town’s history while working for the betterment of Saugus. Last Saturday (Sept. 10), the town embraced Sheehan and Eisener as this year’s winners of the “Person of the Year” award” during the 41st Annual Saugus Founder’s Day Celebration. “In Recognition to Your Dedication to the Town of Saugus. This Award Truly Exemplifies the Outstanding Ideals and Spirit of Our Founding Fathers,” reads the inscription on the plaque presented to each recipient during a special ceremony held during early afternoon in front of Town Hall.

Sheehan and Eisener are the latest of 60 Saugus residents who have been honored at Founders Day, going back to 1989 when the award originated. Since 1993, a man and a woman have received the recognition, which had been presented to male citizens during its first four years of existence. Each year past winners meet to recommend and choose new recipients. Several of the past award winners sat in chairs on a wooden stage set up at the bottom of the steps at Town Hall where the presentation was made. This was the first time in three years that the awards have been presented as past recipients didn’t meet last year or in 2020 because of health concerns over COVID-19.

Peter Manoogian, a 2018 “Person of the Year” award recipient, introduced Sheehan. Here are some highlights from his speech:

I have been asked by my colleagues on this stage to introduce the 2022 Saugus Man of the Year – Mr. Tom Sheehan. Age 95.5, born in Charlestown and lived at #3 Bunker Hill Avenue – came to Saugus in the second grade.

His grandmother was a bookbinder for Ginn & Company. She brought home books that were to be discarded due to flaws. As he describes it, he had a voracious appetite for reading at a young age. He would read anything he could get his hands on, including Shakespeare.

When he moved to Saugus, he lived on Lincoln Avenue towards North Revere. He attended the Cliftondale School until the sixth grade and fondly remembers having been taught by Marleah Graves, of whom the school is now named for. He graduated from Saugus High in 1947, attended one year of prep school before joining the service.

From 1950 to 1952 he served in the army as a Sergeant in Korea. Between 1948 and 1956, he would work part-time at the Saugus Iron Works restoration site. He worked alongside the chief archaeologist and actually helped unearth the giant 500-pound hammer that is now on display.

Upon returning home, he obtained his bachelor’s degree in English from BC, where he graduated in 1956. He became employed by Raytheon in Andover, where he was in charge of writing Policies and Procedures for the next 31 years until he retired in 1991.

He is the father of six and has six grandchildren.

When I visited Tom two weeks ago at his Central Street home merely steps away from the Saugus Iron Works, I found him sitting at his computer, doing what he has done each day for decades – writing; Tom writes 500 to 1,000 words a day. Tom has written 58 books and over 1,000 short stories and poems…all on his computer…all with two fingers! Tom does his writing out of love and not for profit, having only made about $1,000 from his writings.

Tom’s favorite topic, you wonder? It is Saugus, of course.

Not only does Tom embrace Saugus history, but Saugus history has embraced him throughout his life. And just as Major Samuel Appleton inspired Saugonians to watch for the threat of approaching British soldiers, Tom has inspired generations of Saugonians to “Keep Saugus history alive.” “Tell the story of Colonel Appleton” as he did to his troops in Korea over and over. “Tell the story of the undefeated Saugus Sachems facing the undefeated Melrose Red Raiders on a Sunday in 1941 and how glorious it was for the Sachems to bring home a victory.”

His advice on writing is spot on: “Write what you feel.” “Write what you know.” “Be creative.” “There is something to share in every memory you have…explore and expand on those memories.”

Sheehan warns Saugonians to watch out for the threat of losing their identity and their history. I asked Tom, “Are we losing our history?” to which he replied, “I sure and hell try not to let it happen.”

I now wish to introduce the 2022 Saugus Man of the Year, historian and award-winning author about all things Saugus – Mr. Tom Sheehan.

Sheehan, who had told people he was going to draft an acceptance speech, spoke extemporaneously instead, recalling his interest and love of Sachems football after enjoying the 1941 season when Saugus High went undefeated and won the Class C State Championship.

“In 1941, when I was 13, I walked over to Melrose,” he recalled. Going to watch the big game after watching Saugus High win the game 13-0, he said, he walked home after the game and “dove into Sundays sports pages.”

“I loved the game and expressions that they used to tell the game. They’ve been with me ever since.”

Then, Sheehan expressed his appreciation toward the crowd that was there to honor him and others who weren’t there – perhaps there in spirit, too. “Thank you, Saugus. Thank you Saugonians wherever you are … those who came and left, came and went, friends, teammates, classmates, Saugonians … hail!… hail!”

Debra Dion-Faust, a 2019 “Person of the Year” award recipient, introduced Eisener at Saturday’s Founders Day ceremony. Here are some highlights of Dion-Faust’s speech:

This year’s Woman of the Year is a Saugus High School graduate who received her Bachelor of Science degree from Connecticut College with a double major in Botany and Anthropology. She went on to receive a Master’s degree in Landscape Architecture from the University of Massachusetts, Amherst.

Since the early 1990’s she has been one of the 200 members of the Saugus Historical Society who preserve and promote our town heritage and provide educational opportunities, a Board Member most of that time, and President of the organization for the past nine years. In 2015 she won the adult division of the Time Capsule Essay Contest about Saugus for the 200th anniversary of Saugus’s existence.

She is an active member of the environmental group SAVE, or Saugus Action Volunteers for the Environment; an occasional park volunteer who cared for the Saugus Iron Works’ herb garden for a few years before they hired a full-time gardener; a member of the Saugus Garden Club – who may have served you strawberry shortcake in June – and who won the Garden Club’s Unsung Hero award in 2021; a Tree Committee member who preserves our town canopy and plants trees when possible, doing fundraisers with indoor slides or outdoor presentations; she has advised and worked for the community garden for the last two years, thus helping to provide food for the Saugus Food Pantry; and since the start of the pandemic she has written a weekly column in The Saugus Advocate entitled “Saugus Gardens.”

And she has managed to do all these volunteer activities while working at Northeast Nursery in Peabody as a landscape designer and teaching a course in urban tree care at North Shore Community College. She was described by a committee member as a “humble and genuinely nice person” who is “the epitome of Shovel Ready.” Fellow Saugonians, let me introduce you to the 2022 Woman of the Year: Laura Eisener.

Eisener talks about her love for the town

Eisener read from a short speech she had prepared for the occasion.

Thank you so much to the members of the committee who thought I was worth including in their impressive circle! I am awed and somewhat intimidated by the accomplishments of all the “people of the year” that have come before me.

And I am especially proud that this occurs in such a historically significant town. It is true that I grew up in Saugus, just a few streets over from the house (yes, house) that my mother was born in, so I may be a little bit biased. I attended the OLD Lynnhurst school, built in the Victorian era, and my classes moved to the “new” Lynnhurst school when I was in fifth grade. Saugus has changed a good deal since then, but we still have a livable combination of conveniences and nature, with Breakheart, Lynn Woods, Prankers Pond and Rumney Marsh Reservation. Also, Saugus was the site of one of the most significant “firsts” in the new world – Saugus Iron Works – which by providing all the steps of the ironmaking process at one site enabled this continent to gain some technological independence from Europe. It may not have the drama of a battle, but without innovation like this, politicalindependence would not have been a practical possibility.

When I became president of the Saugus Historical Society about 10 years ago, I thought it would be “for a short time” but here I still am today. We still ladle out strawberries in June, offer interesting and thought-provoking programs on local history spring and fall, help conserve the memories of residents and provide a strong sense of place for the students in Saugus schools who will call this their hometown.

One person can’t do it all – it takes teamwork – and I want to profusely thank the Saugus Historical Society board members and volunteers who have spent countless hours to ensure that the society would continue its work, some of whom are here today at the SHS table.

I also want to thank my family for their love and support – my late parents for having made Saugus their home in my early life, my husband Paul, the ranger at Saugus Iron Works who came out on his lunch break to see this ceremony (That’s him in the hat over there under the pin oak) and our dear niece Monique (under the other pin oak), who spent her day off to come here today and who always has a smile and a friendly word for her customers at work.

I suspect a strong reason people in Saugus may know me is because of my garden columns in The Saugus Advocate. It gives me an excuse to get out and enjoy the many gardens, wild and cultivated, that exist so close at hand. For many people, gardening became a new, powerful refuge during the pandemic. It takes the interconnection of a lot of people to make all the town

organizations work, and I see firsthand the great teamwork of people at SAVE, the Tree Committee, the Garden Club and the community garden. I hope I have helped to plant some seeds to help Saugus grow into a stronger and even more lovely place.