A Special Sunday for Saugus Couple 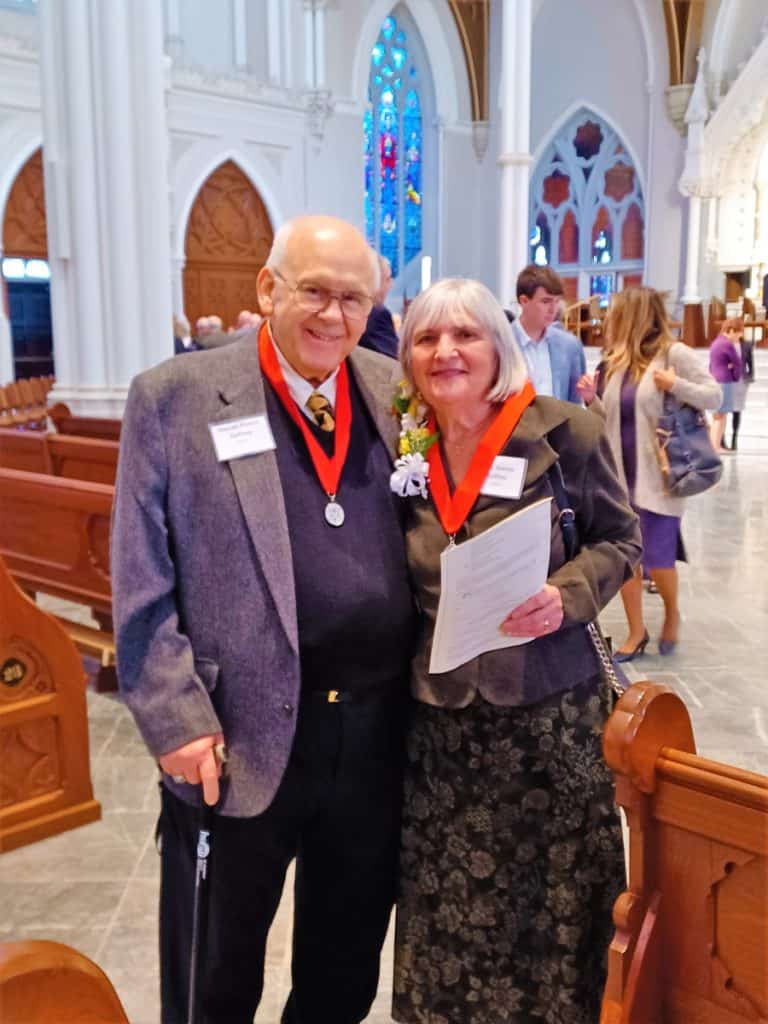 Deacon Francis M. Gaffney and his longtime wife, Joanne M. Gaffney, were among this year’s recipients of the 2022 Bishop Cheverus Awards Medals, which were presented last Sunday (Oct. 2) by the Cardinal at the Cathedral in Boston. This is an honor for all their work for the people of the parish. “Deacon Frank” is the Permanent Deacon of Saugus Catholics Collaborative, which comprises Parishes of Blessed Sacrament and St. Margaret.

The oval-shaped, silver medal bears the image of Bishop Jean-Louis Anne Magdelaine Lefebvre de Cheverus. On the reverse side is the coat of arms of Bishop Cheverus and the episcopal motto diligamus nos invicem (let us love one another). The prestigious award is named for Bishop Cheverus, who was the founding Bishop of Boston and led the Diocese from 1808 until his return to France in 1824. He died in 1836 as the archbishop of Bordeaux.

Each year, one third of the parishes of the archdiocese are asked to nominate a parishioner, therefore most parishes will have one honoree every three years. The criteria given to pastors is that the nominee should be a lay person who has served the parish well over an extended period of time and has done so in a quiet, unassuming and, perhaps, unrecognized fashion.

Deacon Frank has been married to Joanne for 60 years. They have four children, seven grandchildren and three great-grandchildren. He was born in 1939 in South Boston, has lived in Chelsea and moved to Saugus in 1968. He is a graduate of Northeastern University with a B.S. in electrical engineering and a M.S. degree in engineering management. He is a Licensed Professional Electrical Engineer in Massachusetts. He is a U.S. Army veteran – 1962 to 1964 – 1st Lieutenant; served at Fort Gorden, Ga.; Fort Monmouth, N.J., and with Armed Forces Southern Europe, NATO, in Naples, Italy.

He was ordained as a Permanent Deacon in 1988. Deacon Frank served at Sacred Heart Parish, Lynn, for seven years, Immaculate Conception Parish for 11 years and Blessed Sacrament and St. Margaret’s, Saugus – now the Saugus Catholics Collaborative – since 1995. He earned Senior Permanent Deacon status in 2014.

He worked at Boston Edison Co. from 1961 to 1988 and the Town of Danvers from 1989 to retirement in 2008. He is an Honorary Life Member of Knights of Columbus – 3rd & 4th degree. He has been a member of the Saugus Faith Community – formerly the Saugus Clergy Association – since 2008.

Joanne M. Gaffney was born in 1943 in Chelsea, lived in Revere and moved to Saugus in 1968. She is a graduate of St. Rose High School in Chelsea. After her marriage to Deacon Frank, she moved to Naples, Italy.

She worked for the Archdiocese of Boston from 1988 until retirement in 2009 as Assistant Director of Hospital & Prison Chaplaincy.