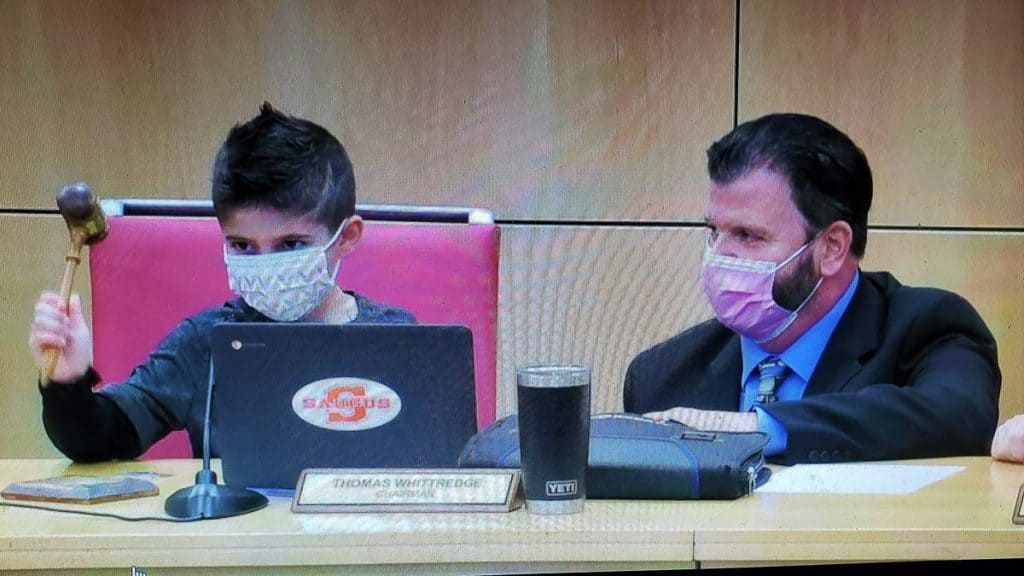 Last month’s quick response by two third-graders at the Belmonte STEAM Academy to help a choking classmate wasn’t the first time this school year that officials cited a student for such heroics. Eight-year old Jacob Puglisi got to sit in the chairman’s chair during a Saugus School Committee meeting last November and bang the gavel as the honorary chair.

School Committee Chair Thomas Whittredge decided that giving up his seat and gavel for a few minutes to the third-grader from the Belmonte Upper Elementary School STEAM Academy was the right way to honor Jacob, after school officials credited him with saving the life of a classmate in the school cafeteria. After learning about how Jacob rushed to the aid of a student who was choking on a nacho during a lunch break and then began performing the Heimlich maneuver on him, Whittredge decided prior to the Nov. 2 town election that he would invite Jacob to a future meeting so the committee could thank him for his heroics. Whittredge got reelected to a second two-year term and again topped the field of School Committee candidates, earning the right to be chair two more years and follow up with his pledge to invite Jacob to a School Committee meeting and publicly honor the boy.

“You are a hero,” Whittredge told Jacob at the Nov. 18 meeting.

“You’re a hero to me. … I’m just really impressed by what you did. A lot of people wouldn’t have done the same thing you did. You didn’t even think twice,” he said

School Committee Member John Hatch presented Jacob with a challenge coin, as a special token to recognize the boy’s heroic deed. “The second that you decided to do what you did that day, you joined a wonderful and incredible family of first responders – and they’re such amazing people – police, fire and EMTs. And I’ve been working with them for 30 years,” Hatch said.

“And the service that you did is incredible, and you really should know that we sometimes award each other with challenge coins. From one first responder to another, we thank you for what you did, Brother,” he said, handing Jacob the challenge coin.

Then Hatch presented Jacob with a plaque with the inscription: “In recognition for your life-saving efforts on a classmate in the cafeteria at the Saugus Belmonte Upper Elementary School STEAM Academy.” Hatch explained that the School Committee was influenced to award Jacob with the plaque to express its gratitude “for your actions, quick thinking and wonderful teaching by your parents.” They taught him to be prepared to respond in an emergency, and specifically how to do the Heimlich maneuver.

“We’re all super excited that you are here,” Hatch said.

“This committee is so proud of what you’ve done. It’s amazing what you did,” he said.