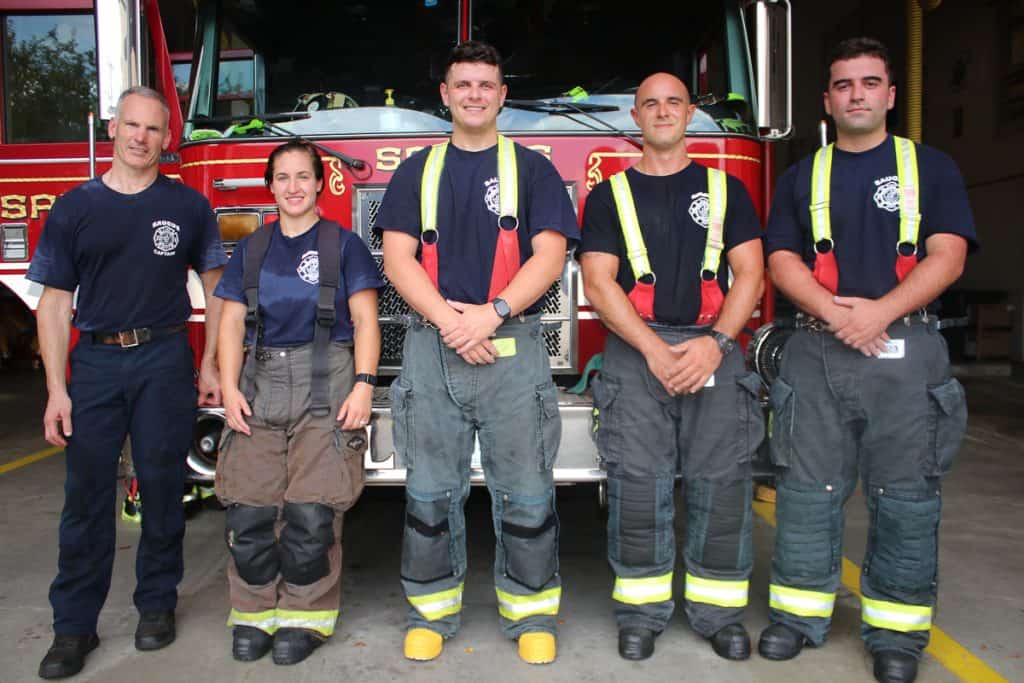 Rachael Patrizzi, the brother of a former Saugus firefighter, made local history this week by becoming the town’s first woman firefighter. She was among a group of five new firefighters who began training in the parking lot of the Central Fire Station on Hamilton Street throughout the week.

Patrizzi, 27, is a Saugus High School 2013 graduate and was an outstanding student-athlete who ran track and field.

“I feel proud becoming the first female firefighter,” Patrizzi said. “Having the opportunity to represent the town is an honor.”

Patrizzi, of Beverly, is a personal trainer and competes in CrossFit competitions, adding that it prepared her for the physical demands of the job. Her husband, Guido, is a Revere police officer. Firefighting blood runs through several generations of her family. Her brother, James Donovan, of Boston, is a former Saugus firefighter who worked for the town for seven years before going to work for the Boston Fire Department.

Patrizzi‘s great grandfather – the late Edwin “Bucker” Holmes – was a “Person of the Year Award” recipient at the 1996 Founders Day and also a member of the Volunteer Saugus Fire Department. She said she drew her inspiration from growing up in a civil service family. Patrizzi earned a degree from Middlesex Community College and works as a phlebotomist at Massachusetts General Hospital.

Saugus resident Joseph Prince, 26, is a Saugus High School 2014 graduate who played baseball, hockey and golf. His grandfather, John MacKenzie, was a lieutenant of the Saugus Fire Department. He is not married nor does he have children. Prince earned his associate’s degree in fire science.

Saugus resident Matthew Massone, 27, didn’t come from a firefighter family; however, his inspiration drew from his father, who served on the Everett Police Department, and his grandfather, who served as a Registry officer. Massone served in the United States Marine Corps. He is not married nor does he have children. He graduated from Malden Catholic High School in 2013. Massone earned his associate’s degree in liberal arts from North Shore Community College.

Saugus resident Derek Hickman, 40, is a 2000 Saugus High School graduate who played soccer. His father was a retired Boston fire lieutenant and his cousin served on Staten Island. He is married and earned a degree in accounting and finance from Bridgewater State University.

Saugus resident Thomas Trainor Jr., 27, is a 2013 Saugus High School graduate who played football, basketball, track and baseball. “My inspiration comes from the desire to serve and protect the town…I have been inspired by the idea of such a rewarding job and friends that have worked the job before me,” Trainor Jr. said.

He is not married nor does he have children. Trainor Jr. worked as a dispatcher for the town. He will be the first firefighter in his family.

Fire Captain Christopher Rizza said the recruits are on a one-year probationary period. On Tuesday, they did a classroom lecture, followed by ground ladder practice. “It went well,” Rizza said. “A lot of information is thrown at them very fast.”