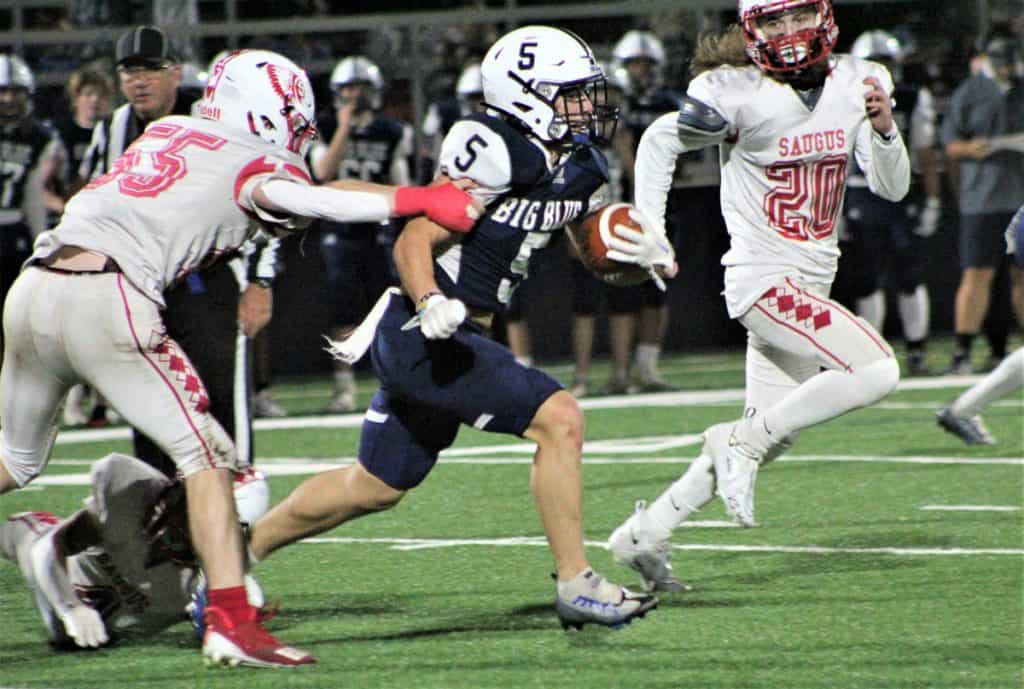 Despite a pretty solid effort from the defense, mainly in the first half, the Saugus Sachems ended up suffering a 38-0 shutout loss to the Swampscott Big Blue in high school football action last Thursday night at Blocksidge Field in Swampscott. It was the fourth straight defeat for the Sachems, who fell to 0-4 on the season.

Saugus is still seeking to break a regular-season winless streak that dates back to 2020. They will get another crack at it this Friday evening when they host the unbeaten Salem Witches at Christie Serino Jr. Stadium (scheduled 6:30 p.m. kickoff). The Sachems came close to knocking off the Witches in a tough 12-6 loss last fall.

Though Salem stands at 4-0, the caliber of competition it has played thus far compared to the Sachems, who have faced some strong programs over the opening four weeks, makes Friday’s contest appear to be a realistic shot at a victory for Saugus.

In last Thursday’s setback at Swampscott, the Big Blue took out their frustration after having started a disappointing 1-2 on the season. The Sachems played well defensively and kept the game within reach through most of the first half. But numerous mistakes by the struggling offense eventually cost Saugus.

An interception by defensive back Josh Osawe in the second quarter was all for not as the Sachems gave the ball right back by turning it over on an interception. Earlier, an apparent interception and return by DB Isaiah Rodriguez was nullified due to an offsetting penalties call.

With the contest still scoreless in the first quarter, the Sachems appeared to have the Big Blue stopped with a third-and-16 situation. But Swampscott running back Jason Codispoti broke through on the third-down play and raced into the end zone for the opening TD of the game.

Saugus starting quarterback Cam Preston was knocked out of the game in the second quarter after he threw an interception and was injured making the ensuing tackle.  Running back Tommy DeSimone and Danny Shea teamed up to man the QB spot from there.

The Sachems’ best efforts defensively couldn’t prevent the Big Blue from producing a 21-0 lead by halftime. The hosts added 17 more points over the final 24 minutes to account for the ultimate result. Meanwhile, the Sachems were unable to create much at all in the way of offense against Swampscott’s defense.

Osawe, linemen Dylan Clark and Brenton Sullivan, linebacker Jaiden Smith, and DeSimone each had strong outings on the defensive side of the ball. They often pressured Swampscott QB Zack Ryan and made it uncomfortable for Ryan in the pocket.