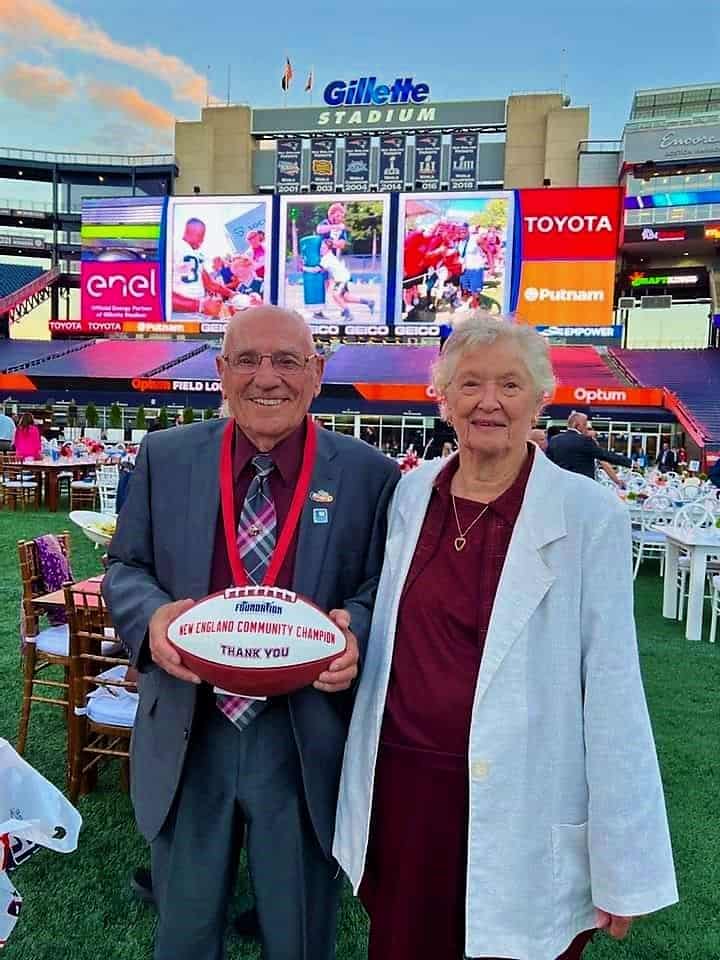 Every true blue New England Patriots football fan can only dream about eating a lavish meal at a table set on the playing field of Gillette Stadium, watching his name flash up on the scoreboard and going home with a Patriots football recognizing him as a “New England Community Champion.” Eugene Decareau was among 32 benevolent Patriots fans from Massachusetts who got to live that dream for real last week (Sept. 1). Decareau, 92, accompanied by his wife Arlene, attended as a representative of the Saugus Lions Club of which he’s been a member for 53 years.

“Somebody from WIN Waste Innovations who I don’t know nominated me for my overall community action,” Decareau said this week.

“I got a call a couple of weeks ago from somebody at WIN who said they were putting my name forward. I have no idea who it was. They asked me to prepare a list of organizations that I volunteered for over the years,” he said.

“Gene has been a champion for Saugus for decades,” Board of Selectmen Chair Anthony Cogliano said.

“It’s nice to see him being rewarded for it. I can only hope to have that much energy at his age. God bless him,” he said.

Decareau wasn’t planning on making his night in Foxboro public until after his photo was posted by WIN Waste Innovations on social media and mentioned at this week’s Board of Selectmen’s meeting.

“It was a great meal – a combination of potatoes, fish and filet mignon, o’derbs before the meal and desert,” Decareau said.

“The meal was marvelous and it was nice to be honored,” he said.

Decareau and his wife look forward to celebrating their 70th wedding anniversary next month. And he will turn 93 in November.