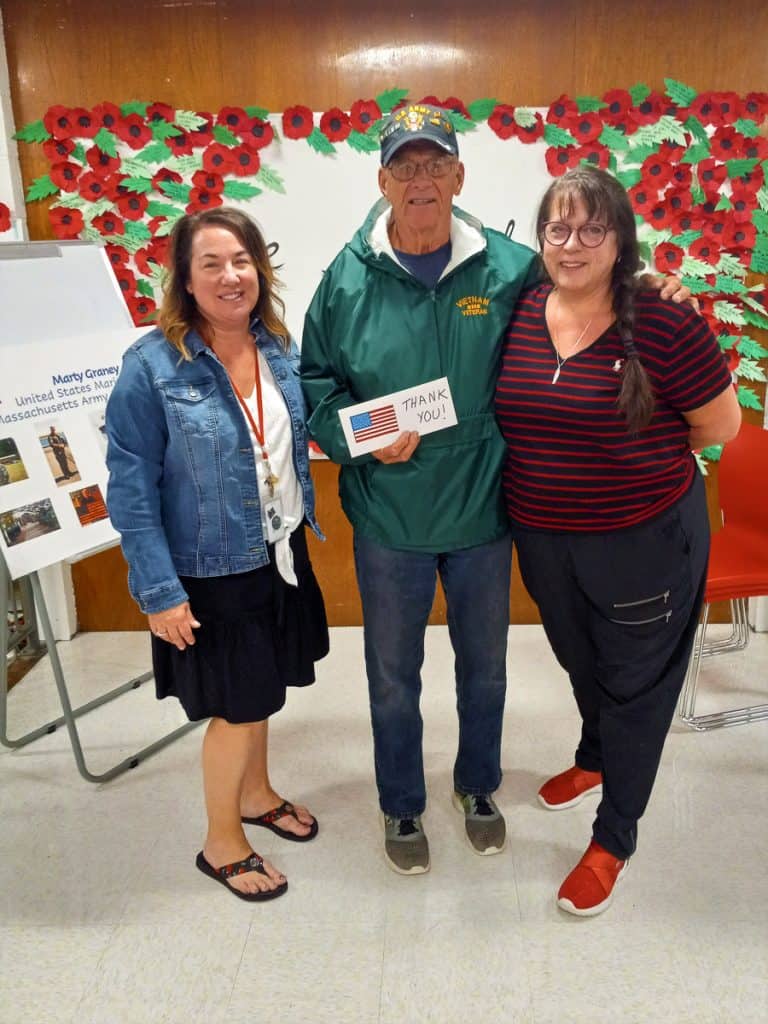 For more than 14 years, Vietnam War veteran Gordon “Gordy” Shepard has done unheralded public service on the grounds of Riverside Cemetery, devoting thousands of hours of volunteer work to make sure that more than 400 veterans are properly honored.

Shepard’s efforts to restore and maintain the gravesites of Saugus veterans dating back to the Civil War has left quite an impression on longtime Saugus educator Caroline Knowles. For several years, she has had her third grade classes – first at Veterans Elementary School and most recently at the Belmonte STEAM Academy – involved in fund-raising efforts to support Gordy’s work.

“The great thing about it is that they’ve been helping out for a little less than 10 years – minus the COVID – and I never asked them for it,” Shepard said in an interview this week.

“They just went out and did it – and raised almost $500 this year. Overall, they have probably raised two grand. It’s money that’s gone to help pay for sprinklers, flag poles, curbing and all the other stuff to help make the veterans gravesites look great,” he said. “Super kids and a super teacher. I know and went to school with her dad – Dan Prezioso. He was a CB who served in Vietnam. We went to Saugus High School together.”

Knowles, who has spent more than 25 years in Saugus Public Schools – the last 16 years as a third grade teacher – recalled that she was inspired several years ago in the midst of a fund-raising project at Veterans Memorial Park. “My father told me about Gordon and how much work he does, and that was about the time they were trying to do the bricks for the park,” Knowles said.

“I would take my own children for walks through the cemetery. I would always see Gordon working there – and what amazing work he would do. He was just doing it because he didn’t want those service men in the cemetery to be forgotten,” she said.

“When they started doing the fund-raising for the park in front of the old Evans School, I started thinking, ‘What can we do to help Gordon, who is doing all that work alone?’ So, we came up with the idea for ‘Red, White and Blue Day.’ And except for two years lost to COVID, we continued it. And it’s a small token that does make a big difference. We’d ask the kids to wear red, white and blue and donate a dollar,” she said.

But the response has been much greater. The fund-raising effort has reached outside of Knowles’ classroom into the school (first Veterans Elementary School and later the Belmonte STEAM Academy). One student donated $40. A teacher contributed $25. There were many $5 donations from school staff.

Several of Knowles’ classes have helped the cause over the years. Shepard has acknowledged his appreciation by visiting her classroom and interacting with the students.

One year, Shepard invited Knowles and her class to a special ceremony at Riverside Cemetery. The National Organization of the Sons of Union Veterans of the Civil War honored Shepard with the organization’s 2019 Founder’s Award for his outstanding service in the memory of Union Civil War Soldiers. It was the group’s only award for that year, and it honored Shepard’s Civil War Burial Plot restoration project, which began in 2015 and took four years to complete. “He invited my class to come down and lead the Pledge of Allegiance during the ceremony,” Knowles recalled.

“Gordon was so proud. He was also excited for the students. He said we helped make it happen,” she said.

Sharing his passion with students

Shepard got invited to the Belmonte STEAM Academy for a special Memorial Day observance several weeks ago. He was there to receive donations totaling close to $500 from a fundraiser organized by Knowles students. The Vietnam veteran got to talk with the students and pose for photographs.

Another veteran educator – Diane Walsh, who coordinates Memorial Day programs for students – added a special touch to this year’s observance: dozens of paper poppies attached to several walls at the Belmonte STEAM Academy. “She asked students for the names of family members and friends who had served in the service and who had passed,” Knowles said.

“She asked anyone if they wanted to honor a family member and friend. She added their name, military branch and the war to each poppy. There were poppies everywhere,” she said.

Shepard was initially drawn to Riverside Cemetery to visit the gravesite of his old childhood friend – Richard “Dicky” Devine, Jr. – a fellow Vietnam War veteran who was killed in combat in January of 1969. Shepard continued to make frequent visits to his buddy’s grave. As the years passed, he noticed that his friend’s headstone was beginning to sink into the ground. He looked at the one beside it, and it bore the name of another hero killed during the war – someone else’s family or friend member. It had been partially covered with grass and dirt. As Shepard surveyed the cemetery, he noticed that many of the headstones and plaques bearing the names of his fellow soldiers were in disrepair.

At that point, Shepard went on a mission to clean and straighten out Devine’s gravestone and then the one beside it. Then, he kept going, doing as many as he could over the course of numerous volunteer hours. As the years went on, Shepard restored more than 400 gravesites belonging to veterans.

Eventually, he began his Civil War Burial Plot restoration project in 2015. The plaques in the Grand Army of the Republic Plot were in very bad shape. Some were sunk into the ground and almost all of them were unreadable.

Shepard noted this week that he’s far from done on cemetery projects on behalf of the Saugus veterans buried there. He continues to work several times a week, mowing the grass and trimming around the gravesites.