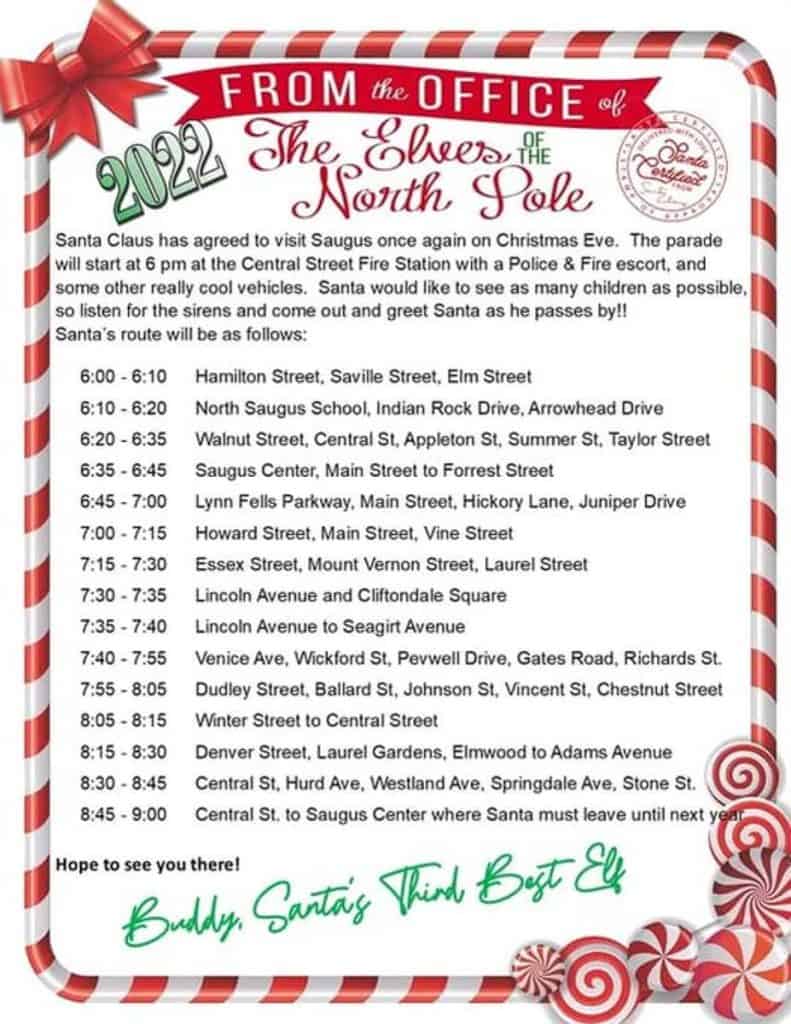 After two weekends chock full of holiday events, there is no letup with nine days remaining until Christmas. There is still time for kids to write letters to Santa Claus and have them dropped off at the Saugus Post Office at 437 Lincoln Ave.

Karen Perullo-Coburn retired from the U.S. Postal Service in May of 2019 after three decades – most of it in Saugus. But she still hasn’t given up the volunteer job she began two decades ago, answering letters that kids write to Santa Claus. Karen has continued to receive Santa letters because she couldn’t find somebody to take over the project.

For several years now, she’s gotten help from her husband, John. He worked for the Saugus Police Department for 33 years, retiring in 2009 at the rank of sergeant. John sits down at the kitchen counter with her and reads the letters. When they’re done, they write letters back to all of the children who included a return address in their Santa letters.

The red metal mailbox with the inscription “LETTERS FOR SANTA” sets in the lobby of the Saugus Post Office in Cliftondale – just a short distance down the street from the Coburns’ Lincoln Avenue home. As of this week, Karen said, they have answered and mailed back about 60 letters, and she estimates that they will wind up responding to more than 100 by the time they knock off a couple of days before Christmas.

Without somebody at the Post Office willing to take over her volunteer project, Karen said, she’s inclined to continue doing it “for the kids’ sake.”

“We try to keep a little magic in their lives,” Karen said.

“I have a special place in my heart for the children. If the kids have a positive experience, it makes me feel like it’s all worthwhile,” she said.

Karen has some advice for parents to help make this homegrown holiday tradition more enjoyable: Be sure to include the child’s address on the envelope so Santa knows where to send his responding letter. Also include a little information about good things the child has done – something positive or something that really stands out, so that Santa can get more personal in his letter. “So, that way, the kids believe that Santa is watching them and they have to be good,” Karen said.

The town’s Christmas Eve Parade is still eight days away. But the parade route is already posted on the Saugus Christmas Parade Facebook Page (https://www.facebook.com/saugussantaparade/). The parade is set to start on Christmas Eve (Dec. 24) at 6 p.m. from the Central Fire Station on Hamilton Street and will finish on Central Street in Saugus Center at 9 p.m. Santa Claus will receive an escort from the police and fire departments.

“Santa would like to see as many children as possible, so listen for the sirens and come out and greet Santa as he passes by,” says Buddy the Elf in a note on the parade that was recently released.

Here are some other holiday-related activities:

Tomorrow (Saturday, Dec. 17) at noon, the Parson Roby Chapter of the Daughters of the American Revolution (MA0136P) will observe its second Wreaths Across America event, helping to remember and honor veterans at both Riverside Cemetery and the Old Burying Ground by laying remembrance wreaths on the graves of our country’s fallen heroes.

There will be the lighting of the Menorah in front of Saugus Town Hall on Monday, Dec. 19 at noon. Rabbi Yossi Lipsker, executive director of Chabad of the North Shore, will be leading the services. This will mark the beginning of Hanukkah, the eight-day Jewish Celebration.

Editor’s Note: Does your organization, church or business have plans for a holiday or holy event that they would like to publicize this month? Feel free to email an announcement or press release to mvoge@comcast.net, headlined “Holiday Happenings and Blessings.”