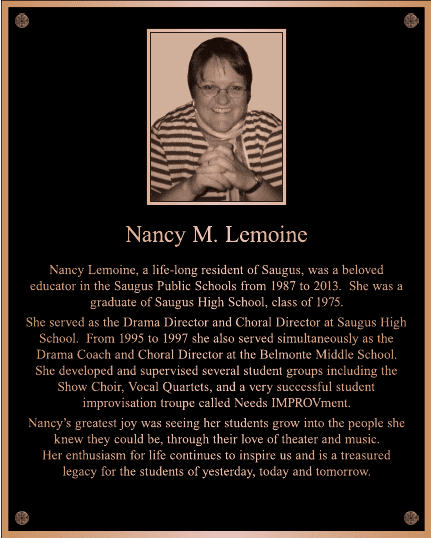 School Committee Member John Hatch called it “an honor to pay tribute” to two educators “who truly made a difference in peoples’ lives.” Nancy M. Lemoine was a popular Saugus High School drama teacher/stage director who taught in Saugus Public Schools from 1987 to 2013. Jerome J. Mitchell was the longtime director of music education and the Saugus High School band director who taught from 1949 to 1993. Both passed away in 2013. But the legacy of the respective programs they developed at Saugus High and the dreams they inspired in the hundreds of students they taught over several decades lives on.

“Nancy truly brought the golden age of performing arts to Saugus High,” recalled Bernie Sacco, a former colleague who regarded her as a mentor to him even though she was much younger and he began his teaching career when she was still in Saugus High School.

“At the Middle School, I tried to plant the seed of theater in my students. When they went on to high school, Nancy cultivated the seed until it blossomed in her students,” Sacco said.

“Nancy instilled in her students so many lifetime qualities, leaderships skills, respect for themselves and others, loyalty, handling disappointment, working with others – even if they particularly didn’t care for them – searching for different ways of looking at a problem and to persevere until a solution was found,” he said. “Nan was not only a great teacher, coach and director…she was a great mentor and counselor. Nan was always thinking about her kids.”

“If she noticed someone having a personal problem, she was there for support – both in and out of the school,” he said.

She was one of those special educators who recognized all types of diversity among her students, which created a wonderfully inclusive environment – sometimes ahead of its time. She initiated one of the first gay-straight alliance support groups in this area. It took a while for society to catch up with Nancy.

The skills and qualities that Nancy instilled are part of the reason why so many of her former students today are performing professionally on Broadway and TV and are teaching drama, directing and also technical aspects of theater. They are in classrooms all over the country, from elementary school right up to university level.

Nancy was courageous and ahead of her time. If she thought a particular show worked for the community, she fought to work out of the box and get it produced. She was never afraid of a challenge.

John Macero, who worked for 12 years in Saugus Public Schools – including as the Fine Arts Director and Principal of the Lynnhurst Elementary School – noted that Mitchell’s students learned all genres of music, from rock to symphony band. “Overall, Mr. Mitchell’s gift to the Town of Saugus was his dedication to his students and their families,” Macero said. Mitchell’s mission was “to simply make lives better” through the music he taught.

“His gift to his students was to empower students,” Macero said.

“He not only built hopes, but he allowed us to do the same for our students. … By teaching us and having us go on, we went on with the same core values,” he said.

Under Mitchell’s guidance, Saugus High School bands traveled all over the country, performing at “historic sites from Washington, D.C. to Saugus, California.”

In addition, Mitchell “always had his students perform for Saugus at football games and parades,” Macero said. “As a citizen of Saugus, he was endeared to the town and its people.”

Mitchell touched many lives as an exceptional music educator for the town from 1949 to 1993. He served as the leader of the 100th Division Infantry Band that toured Europe entertaining troops during World War II. After that service, he graduated from Boston University. He was soon named director of the Saugus High School Band, which evolved into director of music education for Saugus Public Schools.

“Mr. Mitchell developed many musical groups and squads in which the curriculum resulted in students who were inspired to achieve,” says the plaque that honors him. “They shared their talents and musical culture with confidence in performances and parades across the USA and Canada in the Music Exchange program.

“He believed in his students which enabled him to believe in themselves. Mr. Mitchell’s passion for music and teaching is an ongoing legacy to share.”

Sacco praised the efforts of James Wlodyka, a member of the Lemoine-Mitchell Performing Arts Council, as a key reason why the two beloved educators have their names on the auditorium of the new school. “This would never have happened if it weren’t for him,” Sacco said of Mitchell.

“He’s been working on it for five years, mostly by himself…” he said.