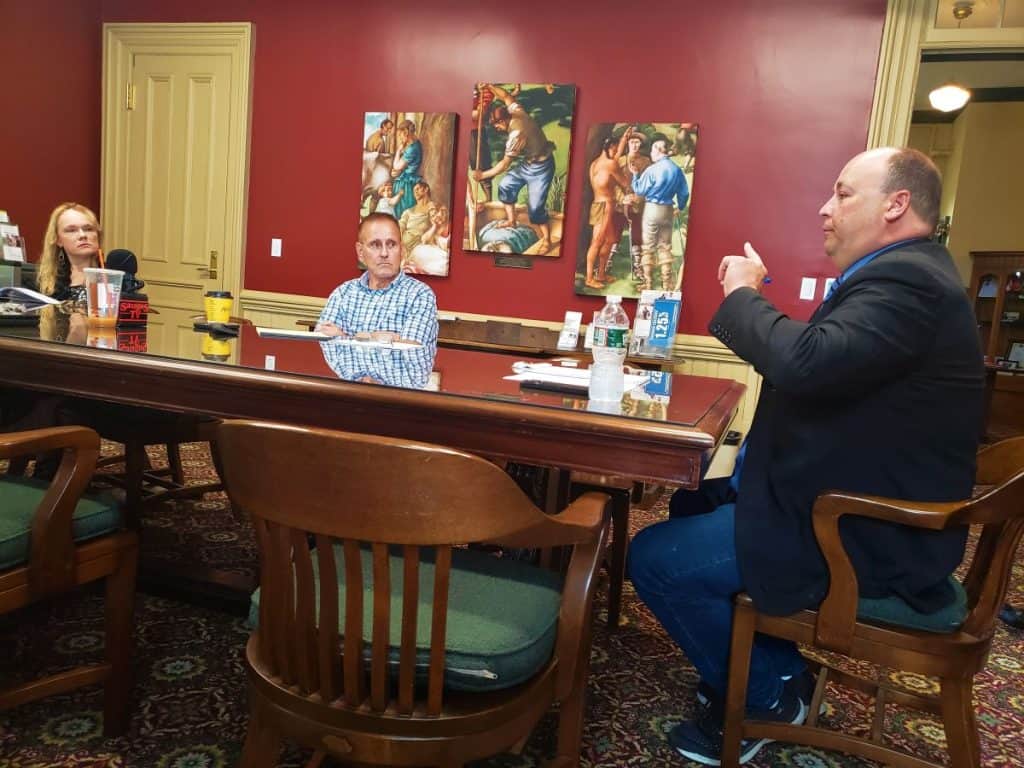 A dogged search to fill key vacancies in town government in recent years has escalated into a major challenge for Town Manager Scott C. Crabtree and calls from elected officials to correct the situation. But Crabtree’s recent decision to promote two longtime town employees from interim department heads to permanent status this week drew high praise from all five members of the Board of Selectmen.

During a briefing at Wednesday’s (Sept. 7) meeting, Crabtree told selectmen that he had filled the director positions at the Youth & Recreation Department and the Saugus Senior Center. In an interview later, he confirmed these appointments:

Crabtree lauds their service to Saugus

The two new town department heads have a lot in common. Both are graduates of Saugus High School: Cakounes is a member of the Class of 2000 and Davis graduated from Saugus High in 1988. Both worked for more than a decade as the number two person in their respective departments: Cakounes became full-time, working under Nickolas in 2010; Davis took over as administrative assistant in 2009. She initially began as the center’s bookkeeper in 2001.

“I am thrilled to announce Laurie Davis as Director of the Saugus Senior Center,” Crabtree said in a statement to The Saugus Advocate.

“As a Saugus resident and years of dedicated service to our Saugus seniors, Laurie will continue to deliver the very best to our community. She has held almost every position at the center and is supported by all. I look forward to Laurie’s leadership and contribution in her new position,” Crabtree said.

In his statement to the paper, he also mentioned his excitement at announcing the promotion of Cakounes as the Director of the Saugus Youth & Recreation Department. “Crystal started at the Y&R back in 2005 and has touched so many lives of our youth in Saugus,” Crabtree said.

“She has been one of the backbones of the department for years and continues to have such passion for our kids and families each and every day. Crystal has so much energy and compassion, she will continue to be great,” he said.

The departments which Cakounes and Davis will administer serve two of the most important constituencies in town: the town’s youths and senior citizens.

Selectmen expressed confidence that the town manager made the correct decision instead of looking outside the town to hire qualified candidates. “They were great hirings,” Selectman Michael Serino said.

“Both are qualified and familiar with their departments. Plus, l believe it sends a message to other dedicated town employees that in certain positions you have the ability to move up into a better job. The Town Manager made two good appointments,” he said.

Board of Selectmen Chair Anthony Cogliano has been outspoken for several months in his view that Cakounes is a quality employee who is capable of running Youth & Recreation. And soon after Davis became interim director of the Saugus Senior Center, he called on the town manager to appoint her on a permanent basis. “I think Crystal and Laurie were perfect hires as they’ve been doing the job already and are very well received in their roles,” Cogliano said. “I couldn’t be happier for both of them and the town.”

Here are observations offered by other selectmen, when contacted by The Saugus Advocate:

Board of Selectmen Vice Chair Debra Panetta: “I am delighted that Laurie Davis was promoted to Director at the Saugus Senior Center. Laurie has done an outstanding job over the years working at the Senior Center, and I know that she is very well liked throughout the community. She is a thoughtful and caring person.

“Crystal was the clear choice for Director. She has done an outstanding job as acting Director. She is wonderful with the children and they all adore her. “My sincere congratulations to both of these dedicated and talented individuals.”

Selectman Jeffrey Cicolini: “I am excited to hear that Crystal has been selected to lead our youth and rec department. She has given so much to our youth in town and she learned from Greg, the best of the best, the importance of providing safe and stimulating environments for the youth of Saugus. I wish her all the best and know she will do amazing things as she is always willing to go above and beyond. Congrats to Crystal!!

“Laurie, I want to congratulate you on your being hired to lead our senior center. This very important role is one that was vacated by an absolutely amazing woman who led the senior center for decades. I have full confidence that you are up for the task and will fill those shoes perfectly. Your passion and desire to serve our seniors is second to none and I have full confidence that you will continue to provide a top-notch environment for our seniors to converse, be entertained and of course have many amazing meals. Thank you for stepping up, we are lucky to have you.

Selectman Corinne Riley: “I congratulate both Laurie and Crystal. They are both great choices and have put in the time and work in their departments to be head of the Senior Center and Youth and Rec. I wish them both luck and I know they will do a great job.”

When interviewed at their offices this week, Cakounes and Davis each expressed passion for their respective jobs and added that they hoped to serve Saugus for many years before retiring.

This is what I always wanted to do: just serving my community, doing the outreach and making sure our kids are safe and have something to do, Cakounes said.

“But it is bittersweet, as I still wish Greg were here. I wish I were still helping him and giving him support. For 16 years, he taught me so much about life. A good part is about being a good person, staying positive, bringing your happiness to the community and having fun,” she said.

“I would like to thank the Town Manager for giving me this opportunity. I learned so much from Greg through the years, and I am so blessed to be able to continue his work,” she said.

Cakounes also credited the work of a coworker for her help over the past year. “I want to commend Emily Grant for stepping up into my former role. She is doing an amazing job as the Interim Programs Coordinator. We are both excited to work together and bring some new ideas and programs to the town,” she said.

As the new director, Cakounes said, she plans to carry on with the same philosophy of the late Gregory Nickolas while attempting to deepen the role of Youth & Recreation in the community. “We’re trying to get more involved by partnering up with other community members on behalf of the town’s youths. We’re just trying to keep the kids happy and safe,” she said.

One of those partners in new programs that involve the town youths may be the Saugus Senior Center. “I want to collaborate with Crystal and do intergenerational programs,” Davis said in an interview.

“Our outreach worker, Cheryl Roberto, wants to bring back the pen pal program, pairing up grade school children with seniors. And eventually we’d love to extend the program to the local nursing homes because they’re residents of Saugus,” she said.

“Before COVID-19, we had kids come up on holidays and read poems and sing songs. We’d love to be able to bring back some of the old programs and new ones,” she said.

Davis already has a close connection to the Youth & Recreation Department. Her husband – Precinct 4 Town Meeting Member Glen Davis – has been a longtime member of Saugus Youth & Recreation Committee and has been involved in a lot of youth sports in town over the years. Her father-in-law, Bob Davis, is superintendent of World Series Park.

“I’m so humbled and overwhelmed by all of the support I have received from the community. My board [Council on Aging] backed me with a letter of recommendation to the town manager. And I received support from the chairman of the Board of Selectmen,” Davis said of the backing she received for the director’s job at the Senior Center.

“I’m very happy about getting appointed [director] and know I can do them proud. This is a job I really love and look forward to doing for the next 10 years,” she said.