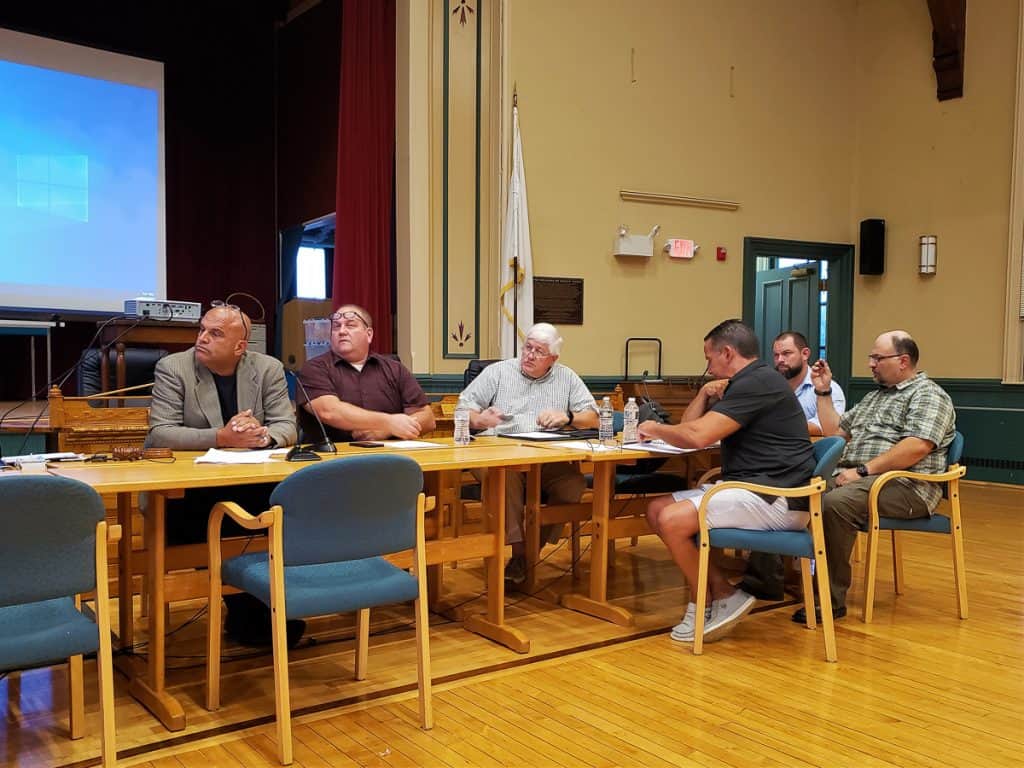 WIN Waste Innovations this week offered to pay the town up to $18.8 million – a $3.8 million increase over what it initially proposed – in return for using the ash landfill near its trash-to-energy plant on Route 107 for another 25 years.

The deal is contingent on whether the Massachusetts Department of Environmental Protection (MassDEP) permits the company to expand an ash landfill that is expected to meet its capacity by the end of 2025. Any Host Community Agreement (HCA) deal would also require input and backing from town officials, particularly the Board of Health.

“It won’t even go to the Board of Health if DEP doesn’t approve it,” Board of Selectmen Chair Anthony Cogliano said Wednesday night (Aug. 24) during a meeting of the Landfill Subcommittee he cochairs with Board of Health Chair William Heffernan.

Subcommittee members voted five to one with two abstentions in support of a motion to accept WIN Waste Innovation’s latest proposal and forward it to the Board of Selectmen.

“A ‘Yes’ vote means we support the proposal,” Cogliano explained to Precinct 10 Town Meeting Member Peter Manoogian at the end of the nearly three-hour long meeting in a packed second floor auditorium at Saugus Town Hall.

It is not clear when members of the Board of Selectmen will review the WIN proposal. The board’s next meetings are scheduled for 7 p.m. on Sept. 6, Oct. 4 and Oct. 18.

Meanwhile, MassDEP representatives are scheduled to meet with town officials and concerned residents at 6 p.m. on Sept. 28 in the second floor auditorium at Town Hall for what is expected to be a discussion on the potential future of the ash landfill. A major obstacle to any deal would be whether MassDEP would allow extending the life of the ash landfill.

At the outset of Wednesday’s meeting, WIN Waste Innovations Vice President of Environment James Connolly presented a revised PowerPoint presentation of the one he made before the Landfill Subcommittee last month. Connolly told the subcommittee that the company had made changes in response to the feedback it received over the past month. WIN Waste now proposes to provide $18.8 million in direct payment – a lump sum payment of $15 million plus $125,000 in 25 annual payments (for total addition value of $3.8 million).

WIN Waste will pay the town $10 million if required to invest more than $5 million due to regulatory requirements, including:

–Capital improvements made at the facility would generate additional tax revenue.

The total value of the deal, including investments made by the company in capital improvements and environmental enhancements, is approximately $30 million.

In addition to providing economic benefits, the HCA would reduce NOx and other emissions below the current permit limits, which are already protective of public health and the environment. The company would also install a stand-alone, ambient NOx monitoring station in Saugus and request that the Massachusetts Department of Public Health update its 2016 health study.

“We are grateful for the subcommittee’s hard work and thoughtful deliberations,” Connolly said.

“Our dialogue has been a model of public-private cooperation, and we are confident the final agreement will benefit both the Town and our company,” Connolly said.

Connolly stressed that the company is interested in sharing with the town an economic benefit of continuing to operate the ash landfill on Route 107 in order to avoid trucking the ash from Saugus to Shrewsbury, Mass., or Putnam, Conn.

The subcommittee received testimony from 27 speakers during Wednesday’s meeting – 10 who supported WIN’s plan, 15 who opposed it and two who were neutral. Many of the supporters came from out of town. They expressed their appreciation of the 370-acre Bear Creek Wildlife Sanctuary, which WIN Waste operates on the Route 107 site.

“However, I don’t think that we have to pay for a bird sanctuary by continuing to accept millions of tons of ash,” she added.

“I’d be happy to pay $350 more in real estate taxes per year if I could see the closure of the landfill,” Slater said.

Longtime Saugonian Eugene Decareau, 92, congratulated the subcommittee for its work in negotiating a potential deal with WIN Waste Innovations. “I thank RESCO, Wheelabrator and WIN… [They] have done one heck of a good job. You’re doing one heck of a good job and I’m with you 100 percent,” he said.

Saugus Fire Capt. Bill Cross, one of the subcommittee members who supports the WIN Waste Innovations proposal, said he would put his trust in the DEP. “If we can’t trust the DEP, who can we trust? … We should put our trust in the DEP and move forward,” Cross said.

Precinct 10 Town Meeting Member Peter Manoogian, a longtime critic of the trash-to-energy plant, praised the subcommittee for doing “some good work.” Manoogian said he would like to see the plant brought up to “the highest of standards,” that they achieve “the lowest emission rates” and close the ash landfill.