Rally for pride and solidarity 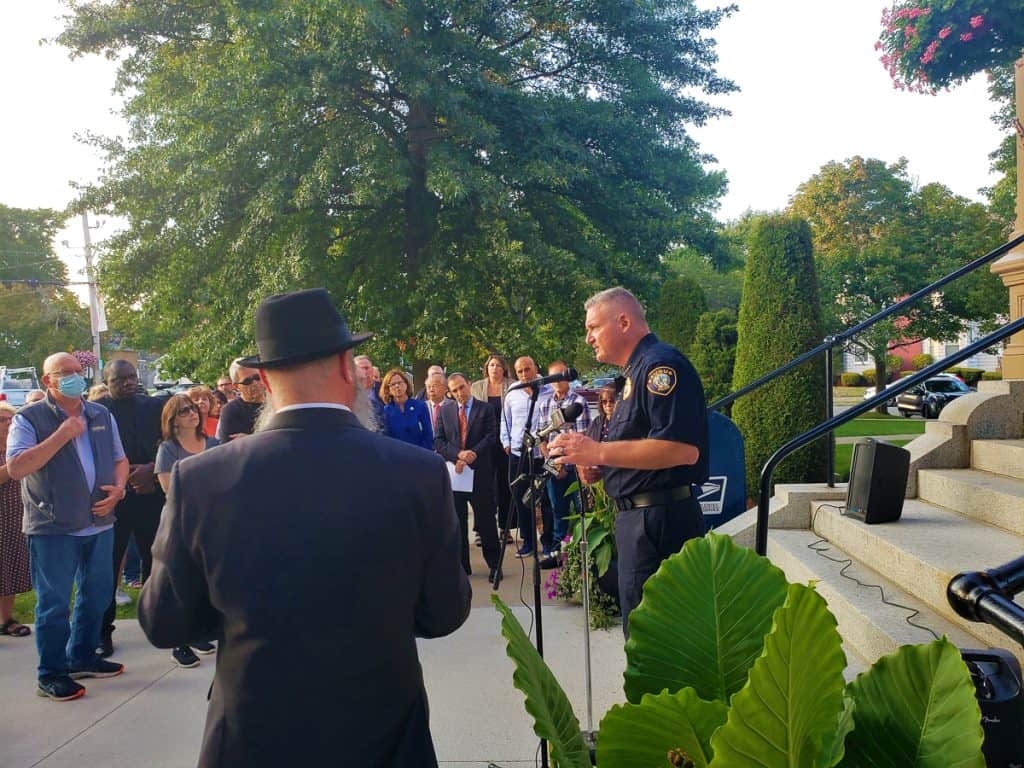 While the anti-Semitic message offended many people who saw it live and later posted on social media, it was a catalyst for a “No Place For Hate Rally For Pride & Solidarity” on Wednesday (Sept. 14) night. About 100 people – elected officials, police chiefs, leaders of the Jewish community, local rabbis and lay readers – joined Chief Ricciardelli and other town officials outside Saugus Town Hall in a show of commendation for recent displays of anti-Semitism, including the Saugus incident.

“It’s just an honor to be with like-minded people,” State Rep. Donald Wong (R-Saugus) told the gathering. “If you noticed, none of the people hid behind a mask,” he said, a reference to the masked men who held the anti-Semitic banner on the overpass.

Rabbi Yossi Lipsker, executive director of Chabad of the North Shore, credited the offensive banner for mobilizing people of Jewish and others throughout the North Shore in a show of condemnation of the hateful act. “I want to say to the cowards out there that each and every time it happens, it backfires,” Rabbi Lipsker said.

“You won’t see this many Jews coming together, except for Yom Kippur,” he said, referring to the holiest, most important day of the year in Judaism, known as the “Day of Atonement.”

State Rep. Paul Tucker (D-Salem), who faces no Republican opposition in the November election for Essex County District Attorney, said he was “proud” of the crowd attending the rally. “We will stand up. We will show up,” Tucker declared, urging people to respond aggressively to acts of anti-Semitism by denouncing them instead of ignoring them.

Many of the speakers offered their support to Saugus, saying they shared the problem with town residents and knew that the recent banner didn’t reflect what the town is about.

“It was really hurtful,” Chief Ricciardelli said of the banner that many drivers on Route 1 South saw on Saturday night.

“This is certainly the first incident like this for me as chief and the first I can recall as a member of the Saugus Police Department.

“The banner was up there for 45 minutes to an hour before they went to Danvers,” he said.

During his short speech to the gathering, the chief said the Saugus Police Department determined that no laws were broken. “The First Amendment made this country great and sometimes not so great,” the chief said. “We have to defend their right to peacefully demonstrate,” he said.

However, he said that after talking with some other police chiefs in Essex County that his department “is going to do some things differently – in documenting and tracking these incidents.”

“On September 11, a day when we remember a great tragedy experienced by our country and the loss of too many, a number of highway overpasses in our Commonwealth were tarnished with antisemitic banners, held by cowardly masked extremists, blaming these terrorist attacks on Jews,” Trestan said. “The scapegoating of the Jewish community is an age-old but exceedingly harmful antisemitic trope that must be called out and condemned whenever and wherever it occurs. Using this tragedy to spread false, destructive and divisive narratives harms our communities and sense of security and disgraces the memory of the victims from that day. Join us in condemning these activities and in recommitting ourselves to upholding our community values of justice.”

Saugus Board of Selectmen Chair Anthony Cogliano was among the local officials speaking at the Wednesday night rally. “I commend my fellow Chairman from Danvers and their entire Board of Selectmen and want them to know the Town of Saugus and its Board of Selectmen will not condone public displays of anti Semitism either,” Cogliano said, referring to an incident that happened later in Danvers.

On Saturday night, 10 masked individuals gathered on the Rail Trail bridge over Route 114 in Danvers, according to a statement signed by members of the Danvers Board of Selectmen. The group “held a large banner displaying a false, destructive, and divisive anti-Semitic message linked to 9/11. These individuals appear to be associated with the same hate group which has recently spread disgraceful propaganda in Danvers and surrounding communities,” the statement said. “We want to be clear that we reject this hateful, anti-Semitic and discriminatory behavior. Not only does this incident spread hate, but it perpetuates misinformation regarding 9/11. Groups like this also try to deny and obscure the brutal truth surrounding the atrocities committed against Jewish people, other marginalized groups, and their supporters during the Holocaust.”

Ruth Berg, 90, who has been a Saugus resident for 55 years, said she is “proud to be Jewish” after attending the rally. “It was very heart-warming to see so many non-Jews who came to support the condemnation of the recent anti-Semitic act in Saugus,” she said.