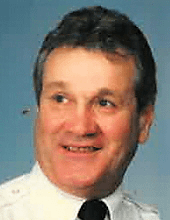 At the beginning of Tuesday night’s meeting (May 24), selectmen observed a moment of silence in honor of retired Saugus Fire Department Captain Charles “Charlie” C. Thomas, who died earlier in the day. Then each selectman took turns sharing their fondest and funniest stories about the friendly guy with the big heart who used to enjoy hanging out “in the corner booth” at the Hammersmith Family Restaurant in Saugus Center, involved in the talk of the town.

“The Hammersmith will never be the same without the corner booth,” Board of Selectmen Chair Anthony Cogliano told colleagues.

“Knowing everything that’s going on in the town … And whatever they didn’t know, they fabricated,” Cogliano quipped.

Selectman Michael Serino told Cogliano that he knew Charlie “when he was back on the Planning Board with your grandfather.”

“He used to have to wake your grandfather up. A great guy. Always friendly. Never said anything bad about anybody,” Serino said.

Board of Selectmen Vice-Chair Debra Panetta called Thomas “Mr. Saugus.” “He was everywhere. He did so much for the town,” Panetta said.

Thomas was a longtime member of the Saugus Knights of Columbus and the Saugus Lions Club. He also enjoyed spending time in his garden and being surrounded by family, according to a local obituary published this week.

Selectman Jeffrey Cicolini called Thomas’ death “a huge loss.” He recalled Thomas being a frequent visitor to the Harbormaster’s Office when Cicolini’s dad ran it.

Selectman Corinne Riley called Thomas “a wonderful man and a fellow Lion.” “When we spoke, he always had kind words to say,” Riley said. “He will be sorely missed. My thoughts and prayers go out to his family.”

Thomas was the husband of Lois (Hobbs) Thomas. They were married for 66 years. Born in Revere, he was the son of the late Caesar and Josephine (DeVellis) Thomas of Italy. Charles was the father of Charles C. Jr. and his wife Lori of Saugus; Darren Thomas of Peabody; Lisa Lawrence and her husband Bob of Fla.; Pamela Ferreira and her husband Mike of Saugus; and the late Brian Thomas. Charles is also survived by his 10 grandchildren and seven great-grandchildren.

In lieu of flowers Charlie requested donations to be made to the Saugus Firefighters Relief Association @saugusfirereliefassociation.com or the Saugus Lions Club for eye research.

The Bisbee-Porcella Funeral Home (549 Lincoln Ave. in Saugus) is in charge of arrangements. Calling hours are scheduled for Tuesday 7:30 to 9:30 a.m., followed by a funeral mass at Blessed Sacrament Church (14 Summer St. in Saugus) at 10 a.m. Burial will follow at Riverside Cemetery in Saugus.