Saugus Gardens in The Fall 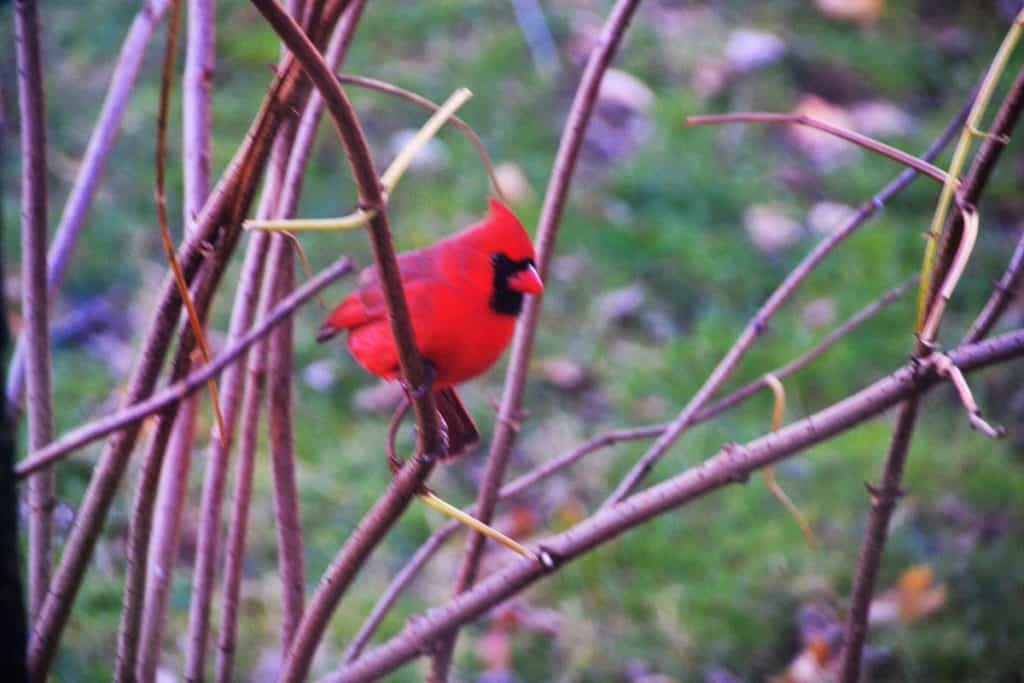 Cardinals are among the most loved birds which can appear in our gardens, and the males are especially colorful at this time of year. They seem to be dressed for the season in brilliant red plumage, while the female cardinal’s plumage is still an olive drab tone through the winter. I have seen as many as five male cardinals squabbling in the hemlocks this season, but they don’t tend to come to the feeder in groups.

Sunday night’s snowfall brought a light blanket of white to Saugus and surrounding towns, making many neighborhoods look like holiday postcards. Christmas lights on Lynn Fells Parkway glowed, and the lights were reflected in the wet streets where the snow had melted. Cold temperatures kept vestiges of the snowfall around for several days.

People were out walking, enjoying the decorations. Some houses have been keeping up the tradition of decorating for decades, as I remember our family driving here to see the lights in my childhood. Saugus was known early on for its festive holiday atmosphere, since in the 1920s Peckham’s Sunken Gardens located on Central Street near Saugus Center was a big draw for Boston tourists when it was lit up for Christmas. As was mentioned in the November program on trains at the Saugus Historical Society, special train excursions ran just to bring people to see the lights there in December.

Even more old-fashioned days are brought back at the Giardina family’s home on Summer Street. At the front of the house, a deep green antique carriage sports a wreath, bright gift packages, an American flag and a tree decked with bright red bows. Nancy Giardina tells me that her home, known as the carriage house, was built around 1830. The carriage adds a great deal of charm and nostalgia to the garden at this time of year. Inside, the house is full of lovely decorations and a “gingerbread house” (this year the gingerbread structure is made from very convincing cardboard) with real candy and icing, lit up from the inside, made by Nancy herself. She decided to replace the real gingerbread with cardboard this year to make it more durable and put pictures of her grandchildren in its windows.

After our dusting of snow, we can’t deny that winter has arrived. I have seen a few outdoor plants still blooming – chrysanthemums here and there and a few bright yellow witch hazel (Hamamelis virginiana) blossoms on the bare branches. While many trees have lost most of their leaves, there are still some leaves clinging which have yet to fall.

The big beautiful European beech (Fagus sylvatica) at the Saugus Ironworks still has a crown full of leaves, now turned a burnt caramel tone. The foliage is still not withered, but no longer is photosynthesizing and will eventually drop off. Other trees around town can be seen with marcescent foliage (leaves that are not evergreen but do tend to cling for a time even after they are brown), particularly oaks, which are known for this characteristic. Norway maples (Acer platanoides) and weeping white willows (Salix alba pendula) also still have some of their foliage, holding on a little later this year than usual.

Tomorrow, Dec. 17, wreaths will be laid on veterans’ graves at Riverside Cemetery and the Old Burying Ground for the Wreaths Across America event by the Parson Roby Chapter of the Daughters of the American Revolution and volunteers. Hanukkah, or the Festival of Lights, begins on the evening of the 18th and continues until dusk on December 26. A menorah will be lit on the town hall lawn beginning Monday. Wednesday the 21st is the winter solstice, after which the days will begin to lengthen. During this week when nights are the longest of the year, the diversity of lights in homes and gardens are especially appreciated.