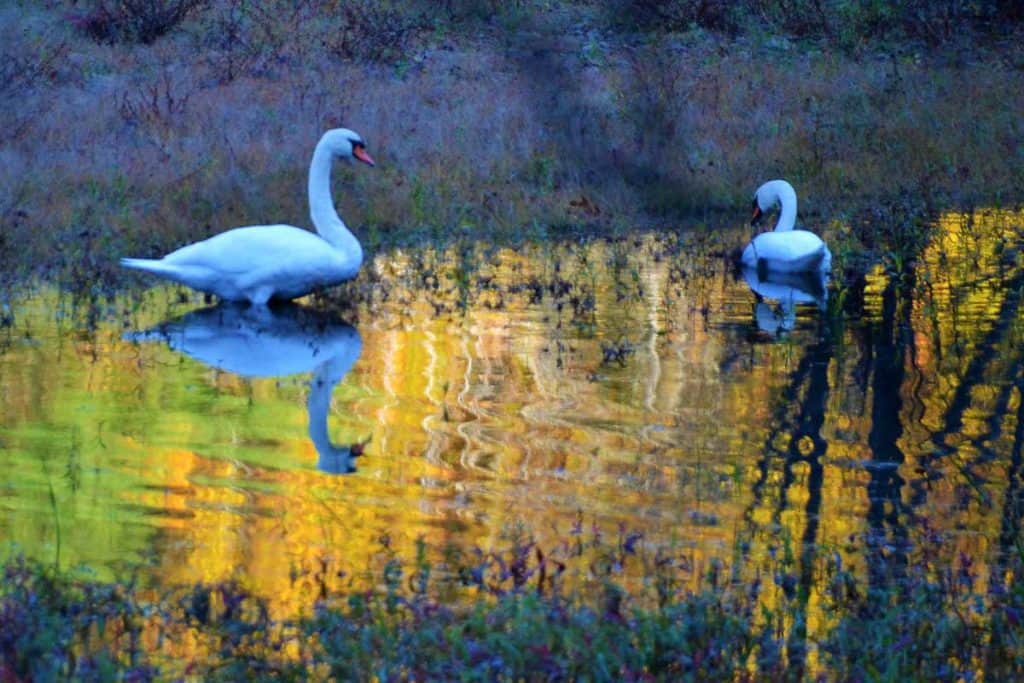 There is still plenty of fall foliage color even though we are now seeing a lot of leaves coming down. Many residents are employing rakes, brooms and leaf blowers this week to clear their lawns from all the leaves. At the Veterans’ Park, a DPW worker power washed the monument and cleared the bricks so that the names are readable in preparation for next Friday’s Veterans Day ceremony. There will be some additional new bricks installed before the event as well.

Some low-lying areas in town have already seen a light frost or two, while other parts of town at slightly higher elevations have yet to see cold enough air settling in. Many areas still have tropical annual flowers blooming, and some of our later blooming perennials, like mums and some of their relatives, can continue flowering through several light frosts. Just a few degrees of difference in temperature can mean the difference between the end of the growing season and a few more weeks.

On Tuesday, November 8, a total lunar eclipse will occur, but you have to be up early to see it. In Greater Boston we will be able to see it just before dawn, but it will disappear below the horizon before the event ends. It may still be worth rising early for it, though, since this will be the final visible total lunar eclipse until March 13, 2025.

The flower of the month of November is generally agreed to be Chrysanthemum, and there are certainly many of them blooming around town. While they don’t all survive winter in our climate, many are actually hardier than they are given credit for. There are also many relatives of mums that continue into late fall.

‘Sheffield Pink’ mums are very hardy varieties requiring little care for reliable very late season bloom. They have a daisy-like head with pale pink ray florets and, like many other mums, are good choices for long-lasting cut flowers. While they were once grouped in the same genus as the florists’ chrysanthemums we see everywhere, some botanists now have separated them into a different group and renamed them (Dendranthemum ‘Sheffield Pink’); they are still considered members of the same large aster or composite family (Asteraceae) along with any other plants that have a daisy-like head of flowers.

Montauk daisy (Nipponanthemum nipponicum) has flower heads very similar to the popular Shasta daisy (Leucanthemum superbum), but the plant structure and foliage are quite different. The somewhat woody stems make the plant look like a small shrub, and while it is among the last plants in the garden to bloom in the fall it is one of the earliest to leaf out in spring. While the species originated in Japan, it was so widely planted on Long Island that its common name in this country refers to the outermost tip of that island, Montauk Point.

Chocolate boneset or false snakeroot (Eupatorium rugosum ‘Chocolate,’ also known as Eutrochium rugosum‘Chocolate’ or Ageratina altissima ‘Chocolate’) is one of the latest native perennials to bloom and will continue through a few light frosts. When seen in the wild, the species usually has dark green foliage, but this ornamental variety has dark purplish brown leaves and stems for much of the growing season. Small white flower heads bloom in October and often into November. As Dee LeMay notes, “By the time the flowers open, some of the dark foliage color has changed to green, but the stems are still a deep purple-brown.” It is certainly a plant that holds a lot of interest through the growing season and gives us something to look forward to in late fall. Some is blooming next to the Town Hall steps as well as in Dee’s garden and mine and a few other gardens around town. Although its flower heads look somewhat different than a daisy configuration, this plant is still part of the composite family (Asteraceae) despite many disagreements over its genus and species names. The mums, Montauk daisies and boneset are all appreciated by the bumblebees and other pollinators still flying around in November.