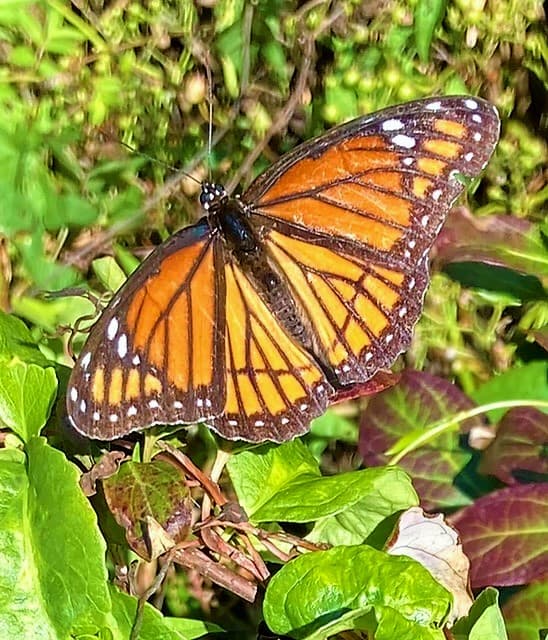 Of the many activities and rituals attending Queen Elizabeth II’s passing, one deeply connected with the garden is the old Celtic custom of bringing the news to the bees. It was a tradition when someone in the household has died to announce major family news to the beehives, drape them in black ribbons and ask the bees not to leave. In 1858, Massachusetts poet John Greenleaf Whittier wrote a poignant poem, “Telling the Bees,” which describes the custom of reassuring the bees in the hive that they will still be cared for despite changes in the household: “Stay at home pretty bees, fly not hence!” Some versions of the ritual stipulate that the news must be sung, or at least spoken in rhyme. While the custom is largely forgotten these days, Queen Elizabeth’s beekeeper is reported to have followed this more elaborate version.

The shrubs spelling out SAUGUS in the center of town were all perfectly clipped for Founders Day, and that evening the full harvest moon shone down on the town. Although the calendar may say it’s fall, the weather has been warm and only a few trees have leaves turning color so far. Plenty of flowers are still in bloom, and many of them are regularly visited by bees and butterflies. Some birds are beginning to migrate, while others plan on sticking around. This makes it an interesting time to birdwatch, since there may be some unusual species visiting our feeders or feasting along their travels. The great blue heron (Area herodias) may be stocking up on fish in the Saugus River, and egrets can often be seen in the marsh or flying overhead.

A splash of brilliant autumn color glows just to the left of the library’s front door where Nancy Sayles has planted a barrel full of red fountain grass (Pennisetum setaceum rubrum), gold and fiery red plume cockscomb (Celosia argentea), orange cosmos (Cosmos sulphureus) and purple and green ornamental kale ((Brassica oleracea acephala). Collaborating with Nancy on the project were Soupi Sayles, Joyce and Al Rodenhiser and Susan Hobbs. These fall annuals can tolerate cooling weather but will not survive a hard freeze. We can still hope to enjoy them for another month or more.

The red fountain grass is a colorful relative of the popular perennial species of fountain grass (Pennisetum alopecuroides), which has green foliage and foxtail shaped flowers that may be briefly lavender or pink before turning tan for the remainder of the fall and winter. The fluffy cockscombs are also known (mostly in the United Kingdom) as Prince of Wales’ feathers. They come in a wide range of hot colors, including hot pink, burgundy, white, orange and the red and yellow seen here. There is a shorter variety with more curled flower stalks that might be a reminder of ceremonial military headgear – crested cockscomb (Celosia argentea).

The orange cosmos can also be found in yellow and is shorter than the pink, white and magenta species (Cosmos bipinnatus) that is somewhat more familiar to most people. While these plants start blooming earlier in the summer, they are tolerant of cool weather and likely to perform well beyond the season when petunias and many other tropical plants begin to fade.

The lowest of the plants in this barrel is the one most often considered a fall plant, since it does not really develop its colors and size until late in the summer. Ornamental kale is not inedible, but its colorful leaves are a bit denser in texture and usually less flavorful than varieties grown for food. The leaves often have blue-green, white and purple foliage which can still look good after a light frost or two.