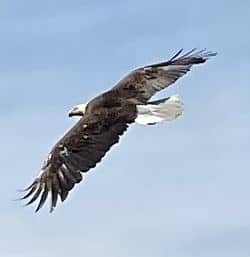 The abrupt change in weather last weekend, from unseasonably cool to suddenly summer, has sent many people scrambling to catch up with their gardening projects. It is finally safe to plant tender annuals without concern about damage from frost at night. Memorial Day is the date to remember for the danger of frost to have passed in most of New England. Up until now it was risky to plant species from tender climates unless they could be quickly moved indoors or covered up if cold weather developed. In general, the popular annuals can be depended upon to continue blooming until some point in the fall, while perennials which return every year have an average bloom time of only a few weeks.

The killdeer which were described last week scurrying around open lawns and marshy areas are still busy protecting their young. Some of the other nesting birds have offspring now. I have been seeing some starling fledglings at our feeder, larger already than their parents, but still being fed seeds by the adults. The young ones’ feathers are still showing brownish camouflage color rather than the adults’ plumage of glossy black with bright specks.

This weekend veterans’ monuments are decorated with flags and memorial wreaths. If space is limited, you might consider a long blooming annual which has a wreath-shaped flower cluster as an appropriate tribute. Verbena hybrids ‘Superbena Red’ and ‘Superbena Whiteout’ are perfect matches for the stripes in the American flag. There are also some dark purple varieties that make reasonable substitutes for navy blue, since true blues are difficult to find in plants. Verbenas are almost as widely available as petunias and million bells and make a good showing in early summer right through to fall. They are popular for hanging baskets and containers and as a low growing summer ground cover in sunny areas. Flower clusters form a circle of individual five-petalled blossoms just under an inch across. In addition to red, white and “almost blue,” annual verbenas can be found in several shades of pink and light violet.

One tall species of verbena that can be a short-lived perennial is purple top verbena or vervain (Verbena bonariensis), which has a long stem and a flower cluster that is more three-dimensional than the popular summer annual hybrids.

In May there are always an abundance of flowers in bloom. Most of them finish up quickly when temperatures soar. Roses and peonies all over town have prominent buds, ready to bloom any day now. Many azaleas are still in flower, and some rhododendrons are blooming while others are just beginning. When I went out to my first appointment of the day, the irises were just beginning to open, and by the time I got home the top two buds were in full flower. A few bulbs like ornamental onions (Allium giganteum and a few other species) are just coming into bloom, while most of the tulips and daffodils are gone.

Very few of our popular flowering bulbs originated in North America. Camassia is a genus of late spring flowering bulbs which got their scientific name from the Nez Perce name for one species which they called “Quamash.” Small camas, also known as common camash (Camassia quamash), shows some of the varied spellings of the original word in its species name and its common names. The word was defined as “sweet” because the bulbs were cultivated as a food, sweet and tasty when roasted over a fire. It is also sometimes sold as wild hyacinth, since the flowers do resemble small hyacinths in appearance. They are pretty close to true blue and may be a sky color or a deeper blue tone. Like Dutch hyacinths and grape hyacinths which they resemble, they have narrow somewhat grass-like foliage which lasts a month or so into the summer before dying back and becoming dormant until the following spring. This species is found wild through much of the northwestern United States and Canada, but several larger Camassia species are found in the southern United States. If you are considering it as food rather than flowers, it is important to distinguish between this and the meadow death camas (Toxicoscordion venenosum, formerly Zigadenus venenosus), which has white flowers and grows in the same western habitats.