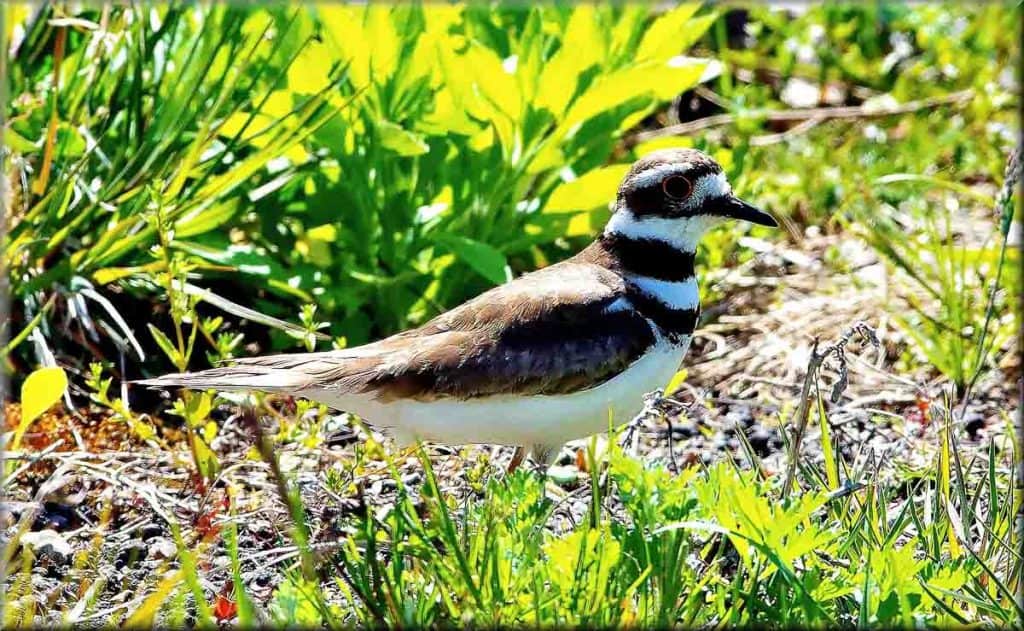 May 20 is Endangered Species Day. The piping plover (Charadrius melodus) is a coastal bird which has been on the federal endangered species list for years. A related plover, the killdeer (Charadrius vociferus), seems fairly abundant in Saugus and likes nesting in open areas, such as meadows, salt marshes and even large mowed lawn spaces.

They are particularly noticeable because of their behavior at this time of year, when they run around in zig-zag patterns to distract potential predators from their nest and their young. They nest on the ground, scraping out a shallow depression and lining it with pebbles and shell fragments, and sometimes bits of grass. Adult killdeer have two dark rings around their white necks, with brownish back feathers. Their eyes have bright red-orange rings, and their legs are proportionally quite long for their body size. The species epithet “vociferus” seems particularly appropriate, since often what makes people notice them are the shrill calls they make in the breeding season. Some are alarm calls, and some are part of mating displays. They eat mostly insects, spiders and small marine creatures.

Lilacs are blooming in every neighborhood right now. Sometimes it is the scent that you notice before you see the flowers. They are among the most requested plants in nurseries despite their brief bloom season. For many people, the fragrance of lilac is something they look forward to all year. Common lilacs (Syringa vulgaris) have been popular plants for centuries in New England, and they thrive in cooler parts of the country while they struggle in areas with shorter, warmer winters. When the weather finally warmed up this week and the winds subsided, we moved ouroutdoor furniture out from the garage and enjoyed coffee on Sunday in the garden. I was marveling that the scent of our lilacs was reaching all the way around the house on the breeze, until my husband pointed out our neighbor’s lilac blooming just a few feet behind my chair, blossoms just peeping over the fence!

Many other lilac species also have the same distinctive fragrance. ‘Lilac Sunday’ – named for the Arnold Arboretum’s famous picnic day in May – is a variety of Chinese lilac (Syringa chinensis). It typically begins a week or more before the common lilac, and it has several flower clusters at the ends of the stems, often becoming heavy enough to weigh the branches down. Like common lilacs, full sun is needed for good flower production.

My niece Monique Todd wanted a pink flowering dogwood (Cornus florida) when we were landscaping our new house, because it was one tree she remembered from the home of her grandmother who lived in North Saugus. The new tree was planted two years ago, but did not flower the first year after planting. This is not very unusual, as sometimes the energy required for making new roots detracts from the amount available for making flower buds. This year, it is covered with flowers on every branch.

Flowering dogwoods are native to the eastern states, and while more common somewhat farther south, I remember seeing them bloom in the Blue Hills south of Boston in the 1970’s. The trees declined both in gardens and in the wild due to a fungus disease known as dogwood anthracnose during the late 20th century, but more resistant forms have made dogwoods a good garden choice again. While their flowers are often described as pink or white, in fact the flowers are tiny and yellow and open up in the middle of four pink or white bracts. These bracts are actually specialized leaves that only appear at bloom time. On dogwoods, the green leaves that will perform photosynthesis appear as the flowers begin to fade, and the pink or white bracts begin to fall soon after. While they tend to flower best in sun, they can still thrive and bloom in part shade. In their natural habitat they usually grow under taller forest trees. Flowering dogwoods are among the most popular spring blooming trees and can be found in every neighborhood in Saugus.