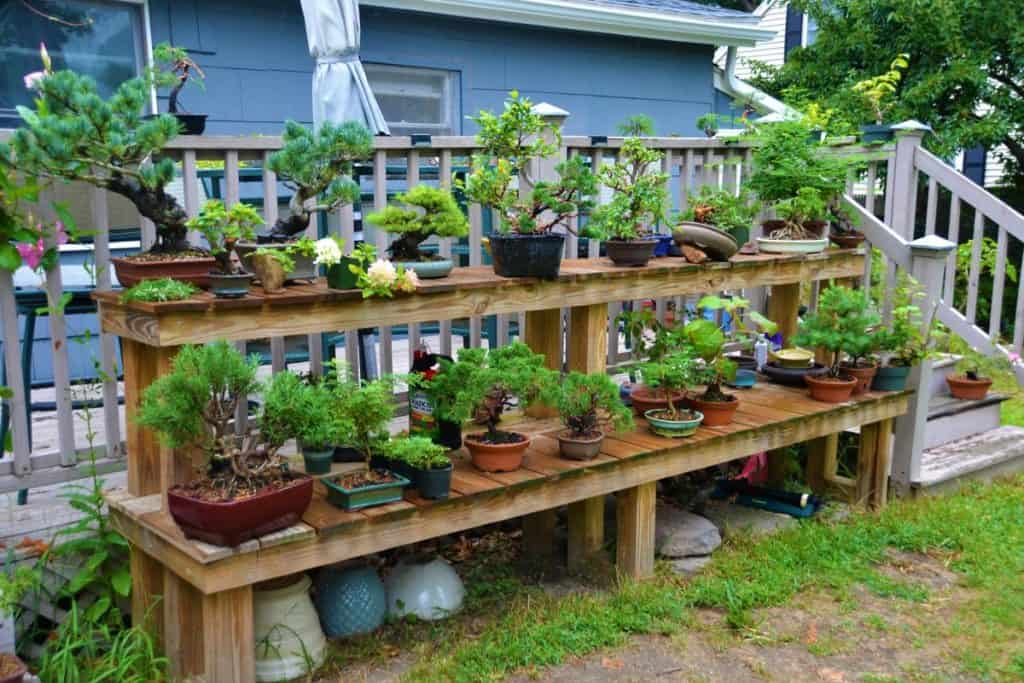 Alex Manoogian has more trees in his Lynnhurst yard than most of us, but they cast very little shade. He is a grower of bonsai trees. Some of his works of art are so small as to fit on the porch railing, while others are in large containers and occupy areas several feet across.

You might think in looking over his collection that he had been doing this for decades, but in fact he and his sister got started at the beginning of the pandemic. Alex had seen bonsai trees in the Topsfield Fair and other exhibitions and admired them, but the changes of activities 2020 demanded opened up time to pursue some new projects. After taking classes at Bonsai West in Littleton and New England Bonsai Gardens in Bellingham, he has developed his skills. He won a blue ribbon for one of his little trees at the Topsfield Fair last year. He is now president of the Northeast Bonsai Association, which meets at the Topsfield fairgrounds and encourages its members to learn more about bonsai and share their interest and experiences with each other.

The trees in Alex’s yard are extremely varied. He has classic bonsai subjects like juniper and pine but has also been experimenting with woody plant species that I have never before seen made into bonsai – such as oakleaf hydrangea (Hydrangea quercifolia) and lantana (Lantana camara). Some of the trees in his garden are in early stages of training while others are well established plants older than he is. An example of the latter is a silverberry (Eleagnus commutata) that was started by bonsai master Mr. Hatanaka around 1950 and maintained for many years by Bonsai West before Alex acquired it. Another very impressive specimen is a ginkgo (Ginkgo biloba) of uncertain age which has an extremely ancient and windswept appearance that Alex has emphasized by carving, pruning and wiring branches.

It’s hard to pick favorites in such a varied collection, but one which appealed to me particularly is a forest planting of nine American larch trees (Larix laricina) Alex started from tiny seedlings and planted on some broken flagstones he glued together to create the appearance of rock outcrop. He carefully planted native moss around the trees and added a handful of peastone in one area, so the finished scene is a miniature landscape with intriguing landform and trees of varying heights. Alex particularly likes developing bonsai specimens from North American native species. American larch is a deciduous conifer – its needles turn color and then drop in the fall, like the weeping European larch (Larix decidua ‘pendula’) in the circle at Cliftondale – and soft new needles emerge in spring.

This year’s Topsfield Fair runs September 30 until October 10. At least one of Alex’s bonsai, a beautiful Japanese garden juniper (Juniperus procumbens nana), is being groomed for entry into the fair this year.