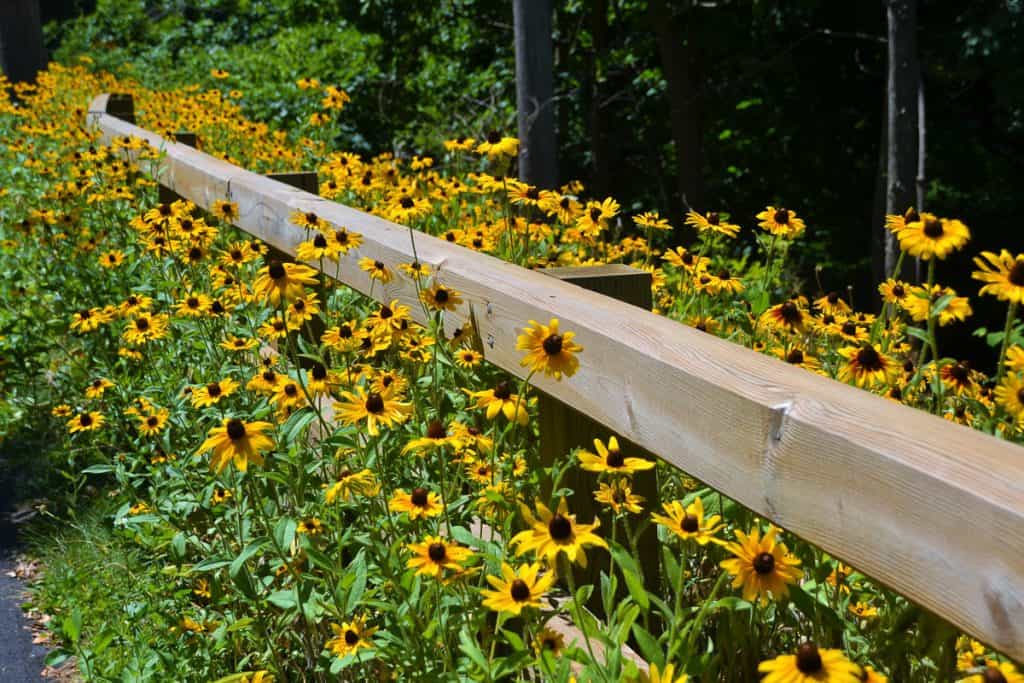 The great majority of showy, flowering trees bloom in spring, but one exception is the silk tree (Albizia julibrisson), which is also sometimes known as mimosa. The beautiful silk tree cherished by Gene and Arlene Decareau stands about 30 feet tall behind their house on Central Street. While the summer flowers are sure to capture people’s attention, the leaves have some interesting features of their own. Each leaf is actually quite large, consisting of 50-60 tiny oval leaflets, so the tree has a delicate appearance unlike most trees of temperate climates. Every evening, starting around 4:30 p.m., the foliage gradually folds up, remains closed during the night and reopens the following morning. This past Sunday afternoon the Decareaus relaxed for four hours watching the tree’s foliage gradually fold behind the abundant pink and white blossoms, enjoying the pleasant summer weather and big band music on the radio. The original silk tree on their property died after about 30 years near their driveway, and this one that they started from a seed has lived for about 20 years now. They are grateful to still have this tree blooming and healthy after its trunk split a few years ago – it is now held together by a brace.

When Gene begins telling people about his mimosa, they often say “Isn’t that a drink with champagne and orange juice?” The name mimosa can also refer to several other plants with similar lacy foliage, also in the pea family (Fabaceae). The tropical sensitive plant – or “tickle me” plant (Mimosa pudica) – folds its leaves very promptly on being touched, one of the reasons it is a popular and entertaining house plant. A South American tree sometimes known as tree mimosa (Mimosa tenuiflora), calumbi, cabrera or tepezcohuite is also sometimes confused with this plant. The species we see in the Decareaus’ garden is actually native to Asia, and it is also called Persian silk tree. It is much more familiar in southern parts of the country, but a hardy variety was introduced to the United States by Arnold Arboretum’s famed plant explorer Ernest Wilson, and most of those we see in Massachusetts are this variety. The Decareaus have observed about 10 other silk trees in Saugus in various parts of town, so you may be able to find one or two in your own neighborhood.

Also blooming at this time in the Decareaus’ garden are two varieties of a hardy hibiscus shrub known as rose of Sharon (Hibiscus syriacus). Their older shrub has white flowers with a red center and seems to be a variety known as ‘Red Heart,’ while the younger one, a gift from Joyce Rodenhiser, has a lavender flower with a darker center. Rose of Sharon is a popular shrub in most neighborhoods of Saugus and has several flower variations in pink, white or light purple, sometimes solid colors and sometimes with a reddish center. Flowers may be single, in which case they will produce seeds, or double, in which case extra petals develop rather than reproductive parts so that new seedlings do not develop. Double flower forms do somewhat resemble a rose, although it is not related to actual roses. This species is very widespread around town and grows in many gardens because it can bloom and thrive in sun or part shade. It often remains blooming from July to September.

Saugonians walking or cycling on the bike path may notice abundant golden flowers along the way, especially near Saugus Center. The ox-eye daisies mentioned several weeks ago are nearly finished blooming but the black-eyed Susans (Rudbeckia hirta and Rudbeckia fulgida) growing alongside them are now at their peak of bloom. When I stopped to admire them Friday afternoon, a lady who declined to give her name stopped me and said the varied flowers along the bike path were like “a stairway to heaven” and had helped sustain her through the tough months of COVID. Even in the winter, she said, there was always something of interest in nature along the trail.

Two species of black-eyed Susan are commonly available and both are often seen in gardens and fields. The common black-eyed Susan (Rudbeckia hirta), also sometimes called brown-eyed Susan, usually has dark brown disk flowers in the center of golden yellow rays which may be sometimes tinged with red. It is a short-lived, herbaceous plant. Perennial black-eyed Susan, also known as orange coneflower (Rudbeckia fulgida), often has a slightly smaller flower with similarly dark brown or occasionally greenish disc flowers surrounded by gold to brick red disk flowers. Many hybrid varieties are available which bloom through the late summer in sunny locations. They are related to sunflowers and other daisy-like plants in the Aster or composite family (Asteraceae), which is known for its composite flower heads that contain more than one flower type.