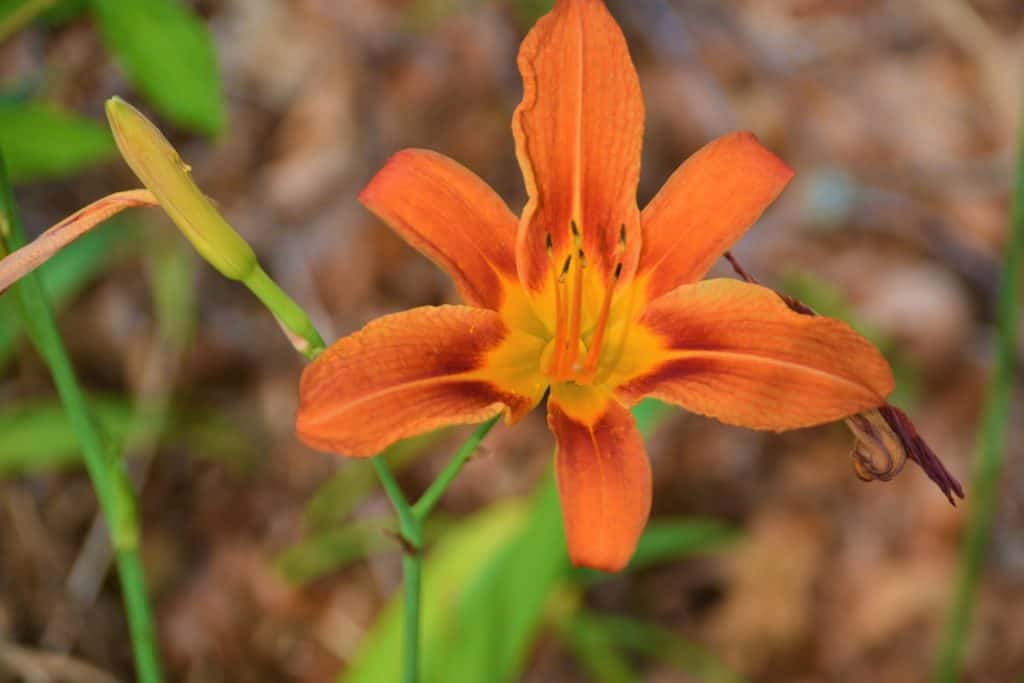 An attractive “roadside weed” with a sky blue flower is common chicory (Cichorium intybus), which is originally from Eurasia and North Africa. Foragers may recognize it as an edible plant whose leaves can be used as a slightly bitter vegetable for salads, and whose roots can also be eaten much like a carrot or parsnip. The roots have also been roasted and used as a non-caffeinated coffee substitute or added to actual coffee beans, so it has also been known as coffeeweed. Sometimes this was done because people preferred the flavor to real coffee, but during the Civil War it was used by Confederate troops and Southern citizens because of the blockade which prevented coffee and other goods from being brought into the seceding states. Special varieties are cultivated and the leaves are blanched as elegant vegetables, such as radicchio and Belgian endive, and people familiar with this may call our naturalized plant wild endive.

Due to the plant’s ability to grow in gravelly soils and dry situations, it thrives along roadsides and railroad embankments where gravel has been used to build up roadbeds. It can be found in many such areas in Saugus, including the edges of the rail trail in Saugus Center, where people can see it near the sidewalk on Central Street. The ability to thrive in dry sites and what field guides often describe as “waste places” helps explain why this species is thriving during this year’s drought and sunny weather.

Chicory may not look much like a daisy, but it belongs to the same family, Asteraceae. In parts of the United States, it is known as blue daisy, blue dandelion or even simply blue weed. The ocean or sky blue blossom color has given rise to names like blue sailors or ragged sailors. Since it often is a desirable forage plant for livestock, another name is horseweed. Occasionally, flowers may be found that are pink or white. The flowering branched stems make attractive but short-lived bouquets since each blossom only lives a day or so.

Another perennial blooming around town this week is named for its reputation of blooming for only a day – tawny daylily (Hemerocallis fulva). Since there will be quite a few buds per plant, you may find that it is in bloom for a few weeks even if each individual blossom only lasts one or at most two days. The flowers close up at night or if you bring them indoors out of sunlight, so they are not very good as bouquet flowers. If the vase is outdoors during the day, the flowers will stay open, so they only work for outdoor arrangements!

While once classified in the lily family (Lilaceae), daylilies are now in the asphodel family (Asphodelaceae), which includes plants such as aloe (Aloe vera and about 500 other species) and red hot poker (Kniphofia spp.). Daylilies are very popular with plant breeders, and there are thousands of varieties available. The tawny daylily is also often simply called orange daylily, since it is a bright orange color with a yellow center. Daylily hybrids may be yellow, pink, red, purple or combinations of colors. It is also sometimes called tiger lily, although there is a true lily (Lilium spp.) colored orange with black spots that also is known by that name. The tawny daylily is very easy to grow in sunny locations in almost any soil and tends to increase over time. It can be seen blooming all over, and many people are likely to recall being given their plants by a friend, neighbor or family member. Nurseries rarely sell the plain orange daylily, but are likely to carry reblooming varieties which flower over a longer part of the year, and perhaps a few once-blooming varieties which have unusual colors or other features.

Another pretty flowering wayside “weed” is daisy fleabane (Erigeron annuus), which has sprays of daisy-like flower heads each about an inch across. The disc flowers are yellow, and from a distance the rays appear white but on closer examination often turn out to be very pale lilac. Of the three flowering plants described this week, daisy fleabane is the only one that originated in North and Central America and did not migrate here with European settlers. It can grow anywhere between one and five feet tall. It may continue flowering most of the summer in sunny locations, and it makes a great filler for bouquets.