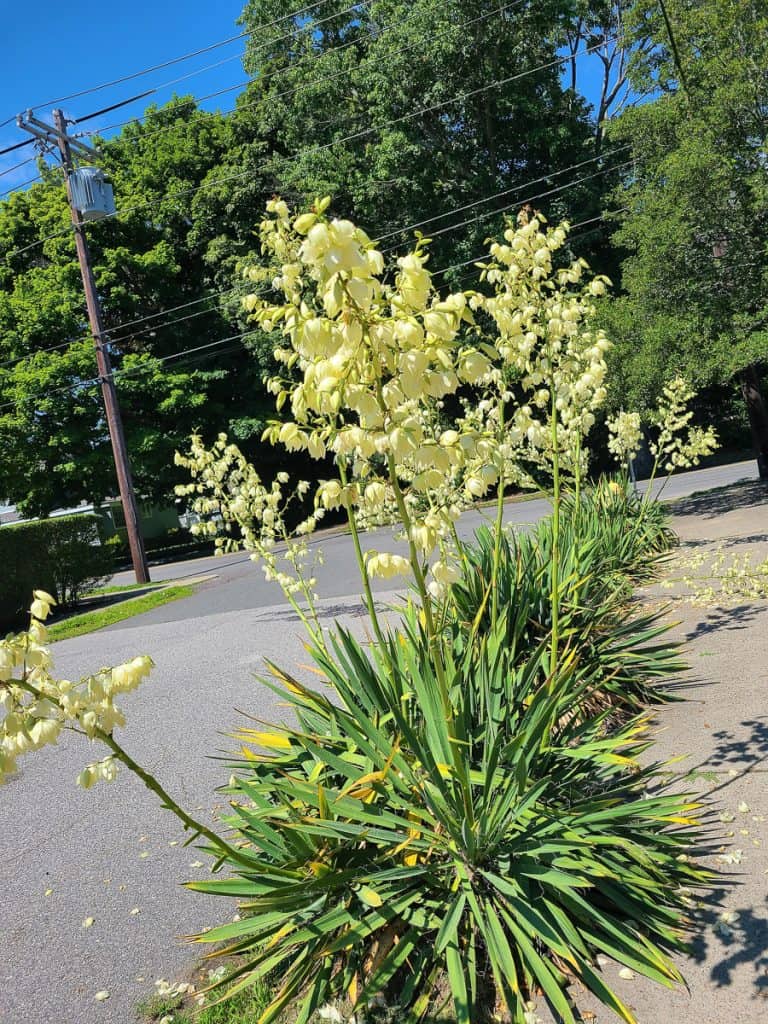 Hot weather has certainly arrived and we are still well below average for rainfall, so gardens are thirsty. On the other hand, we have had plenty of pleasant weather to pursue gardening and other outdoor activities.

The tall stalks of white bell-shaped flowers on Prospect Street near the corner of Summer Street have gained a lot of admiration the last few weeks. Homeowner Lisa Stasio believes they may be 20 years old, and they have grown more flowers over the years. There had been some on Summer Street years ago, but they have not fared as well, perhaps due to more salt being applied to the busier street. The plants’ pointed leaves remain in the winter to provide some color, but it is when they are in bloom that they really capture the attention of passersby. Lisa says she has used the stalks after blooming to stake up other plants in her garden.

Common yucca (Yucca filamentosa) grows wild in dry rocky terrain in the southeastern United States and is also known as Spanish bayonet for its stiff, pointy foliage and as Adam’s needle because of the threadlike filaments protruding from the leaves. It is very drought tolerant and can send its parsnip-like root several feet deep into the ground to ensure it gets enough water. In late June, tall stalks that Lisa describes as looking like giant asparagus grow up and produce the bell-shaped blossoms that we are seeing now. In their natural range, they are pollinated by yucca moths, but we don’t see many fruits and seeds produced in New England from the flowers. They are quite cold-hardy, though, and the plants have no trouble with Northeast winter weather. There are a few in bloom in the center of the rotary in Cliftondale Square.

Those who have never grown their own vegetables may be completely unfamiliar with the flowers that precede the fruits of tomatoes, cucumbers, beans, squash, etc. Many of the plants at the community garden behind the rectory of St. John’s Church are flowering, and a few have fruits beginning to develop, including tomatoes and peppers. The harvest of these plants will be donated to the food bank in Saugus. This week the garden also has a bountiful supply of vegetable plants in pots donated by Huberman’s Greenhouses, which will be given out to members of the Saugus community who would like the opportunity to grow their own vegetables. Details can be found in “The Sounds of Saugus” section of this paper.

Cucumbers are among the new arrivals at the garden, and several of them have charming yellow flowers already blooming. Cucumber (Cucumis sativus) is a vining annual from India and southern Asia now grown in most parts of the world for its “fruits” used as a vegetable. Many different varieties of this species are grown, some with large fruits used as slicing cucumbers, most familiarly used in salads. Other varieties are grown primarily for pickling, during which process they are cooked and flavored, usually with vinegar and other herbs or spices. Small pickles called gherkins are sometimes made with small immature cucumbers or with a closely related species often called gherkins (Cucumis anguria). Cucumbers are members of the gourd family (Cucurbitaceae) along with pumpkins, squash, watermelons and some types of gourds.

The summer Wednesday evening concerts at Saugus Iron Works provide a pleasant outdoor diversion and give a chance to see some of the interesting wildlife that enjoy the river and gardens at dusk. Birds like great blue herons, great and snowy egrets, Canada geese, several kinds of ducks, and even the bald eagles have been seen enjoying the water, fish and/or aquatic plants in the turning basin of the Saugus River before sunset. Butterflies and other pollinators visit the flowers in the herb garden and along the river edge. Deer are occasionally seen on the nature walk or near the blacksmith shop in the morning or early evening.