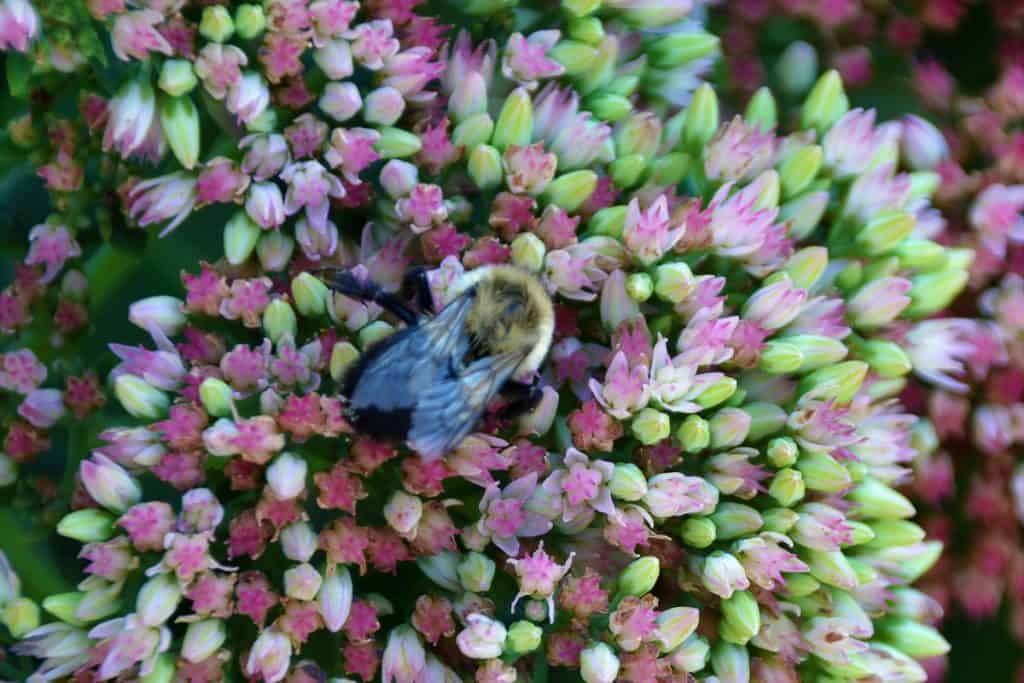 Summer goes by so quickly and suddenly fall is upon us! However, we may be anticipating lower temperatures and rain with a bit more than the usual enthusiasm. The fires at Breakheart and Lynn Woods have temporarily taken away some of our green refuges, and we will certainly be seeing big differences in the forest canopy over the long term as a result of the fires and this long drought. Deer and other wildlife have had to seek water and shelter beyond their usual stomping grounds. It has been quite a contrast to the unusually rainy summer of 2021.

A few of my neighbors have asked for ideas for good late-blooming plants that are drought tolerant. Once established, members of the orpine or stonecrop family (Crassulaceae) are extremely well adapted to shallow soil and dry conditions and will still look perky when everything around them is wilting from drought. Members of the stonecrop family are succulents. The leaves are thicker than typical foliage of most plants, and this is because they are actually storing water in the cells so they can withstand longer droughts.

Autumn Joy Stonecrop (Hylotelphium ‘Autumn Joy’, formerly known as Sedum ‘Autumn Joy’), is just beginning to bloom now. The leaves emerge in early spring, and by midsummer the flower stalks have formed but remain green for several months. A slight pinkish blush is just starting to show now above the green foliage. The flowers are produced in very dense clusters and are very attractive to pollinators. They are a soft pink through September, and by October the flowers begin to turn bronze and eventually turn brown and can remain through the winter on the dry tan stems. Also in October, the leaves turn pale yellow and drop by November. The dried flower heads can be left in the garden through the winter or snipped off in fall. This plant can give some structure to the perennial garden throughout the year and tolerates full sun or part shade. Despite a change in the genus name from Sedum to Hylotelephium, many people continue to refer to this plant as sedum. Another common name you will occasionally encounter is orpine.

Also in the stonecrop family is another group of succulent leaved, hardy plants that survive drought quite well. They are often called hens and chickens (Sempervivum spp. and Jovibarba spp.), although another name for them is houseleek. When you look at this plant it usually resembles a large rosette of greenish or reddish thick leaves, with a few smaller rosettes of foliage attached to them, much like chickens hiding under the wings of the mother hen. These offsets are the primary way they reproduce, rather than by seed. The smaller plants can be removed and placed in soil and will grow on their own and eventually become “hens” surrounded by their own “chicks.” The other common name, houseleek, dates back to the Middle Ages, when they were planted in the thatched roofs of buildings in the belief that they would protect the home from fire and from lightning or to protect the health of the inhabitants. They thrive in very shallow soil, or even sand, and are good choices for rock gardens. Once a rosette produces its stalk of flowers it dies, but the smaller offsets survive and may live for many more years. The scientific name “Sempervivum” means “always alive” – an appropriate name since they can survive so many challenging conditions.

Other members of this family gardeners might recognize are some popular tropical plants used as houseplants, such as jade plant (Crassula ovata) and several species of kalanchoe (Kalanchoe spp.) The thick leaves of these plants also help them survive long periods without water.

(Courtesy photo to The Saugus Advocate by Laura Eisener)