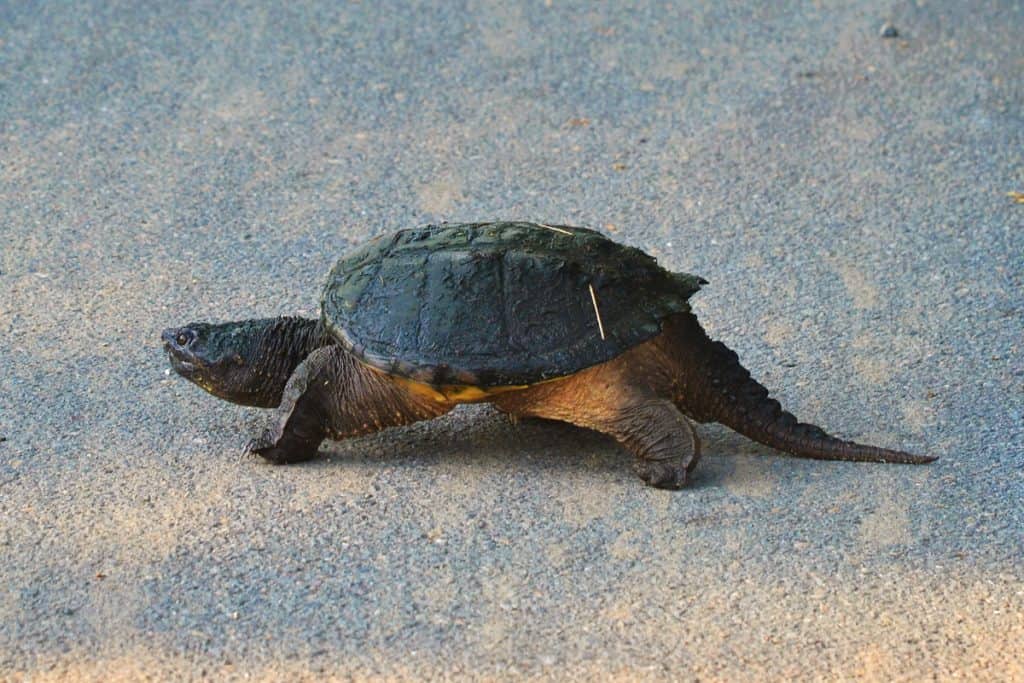 A JAYWALKING TURTLE: This snapping turtle slowed down traffic while crossing Central Street near the Saugus Ironworks National Historic Site on Wednesday (July 7) morning. (Courtesy photo by Laura Eisener to The Saugus Advocate)

There was high drama on Central Street on Wednesday (July 7) morning when a snapping turtle (Chelhydra serpentina) tried to cross the road right at the curve by the Saugus Ironworks.

A passerby tried to alert motorists who might have been coming around the curve since those traveling south might not see it before it was too late. Saugus Police Lt. Anthony LoPresti was out on his rounds when he saw the situation, and he stopped to direct traffic for the turtle’s and the public’s safety. A few people stopped to watch. Rick Saulnier of the Ironworks maintenance department, being familiar with turtle activities in the park, picked the turtle up by the shell and brought it over onto park property so it could continue its travel to a nesting site, and everyone continued on their way safely.

Park Ranger Paul Kenworthy says many snapping turtles lay eggs in the park near the river at this time of year, and this turtle was likely planning to do exactly that. This one may live in the cranberry bog at the end of Marion Street but was traveling to its annual nesting location. Snapping turtles like sandy locations near water, since it is easier to dig, and as soon as the turtle eggs hatch, the young ones head directly for water, making the Ironworks location perfect for the turtles’ needs.

Rick Saulnier, who rescued the turtle, has worked for the park service 24 years. He grew up right behind the park on Lothrop Street. Decades ago, before the pathways in the park were paved, turtles would often try to lay their eggs right in the paths, and the staff would have to move them.

Rick did get a little clawed by the turtle, so it is not recommended that people try this on their own! Generally, the best thing is to just let the turtle cross a street on its own, but it may require warning motorists to stop or slow down. Turtles should never be picked up by the tail, and snapping turtles have a longer neck than most people realize and can move pretty fast when they feel it necessary, so bites or scratches are quite likely.

The park’s site on the banks of the river makes it an ideal location for many kinds of wildlife, and it is always a good idea to be mindful of safety while enjoying seeing these fascinating animals.