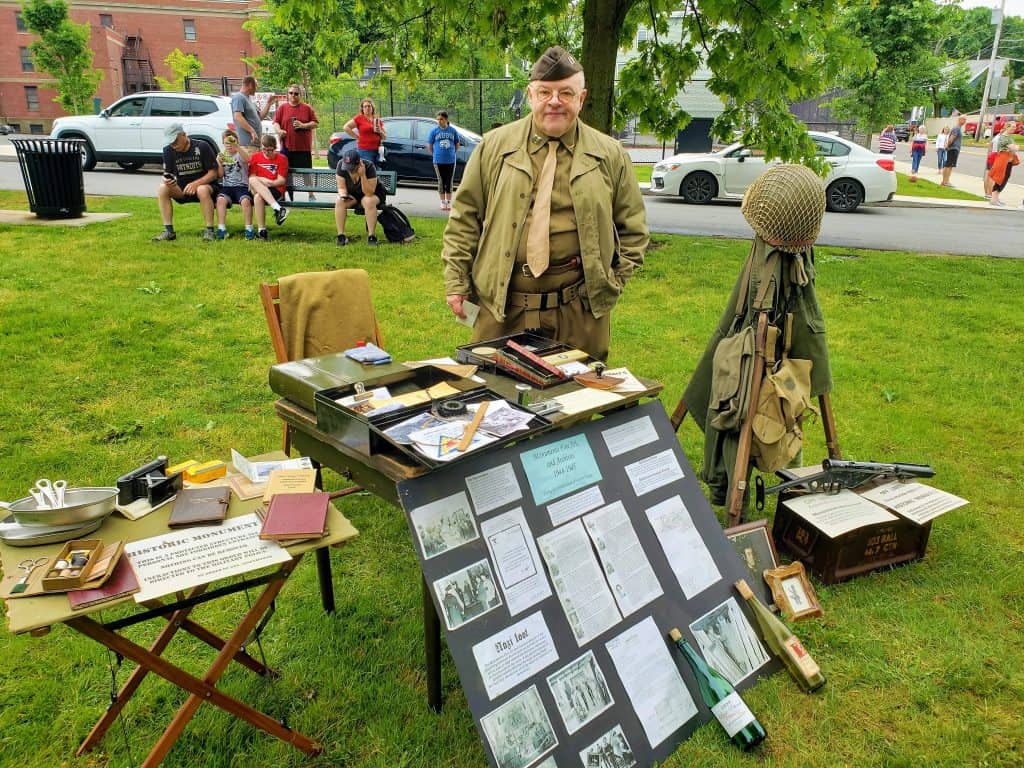 Stephen H. Belyea gave the crowd gathering at Veterans Memorial Park something to do last Saturday (May 28) as adults and children waited anxiously for the start of the town’s first Memorial Day Parade in three years. Dressed in a World War II uniform, Belyea stood behind a display set up on the lawn. The two tables contained artifacts – some of them real; others replicas, photos and articles from the era pertaining to the war. The Army helmet and some of the gear stood out. Belyea even had a replica identification card bearing his own name as if he were a soldier from World War II.

“We have to make sure that people don’t forget history about the war,” Belyea said. “It’s important.”

It was clear that Belyea had piqued the curiosity of anyone looking his way before the start of the annual Saugus Veterans Council’s Memorial Day Parade, which had been a popular event before it got canceled by the COVID-19 pandemic for 2020 and last year.

“We had a halfway decent crowd along the parade route – but nothing quite like when I was a kid years ago and you couldn’t find a place to stand on the sidewalks,” said Saugus Veterans Council Commander Steve Castinetti.

“But it was a decent turnout, probably the best crowd we’ve seen in a long time. We had the Boy Scouts deliver fliers to homes all along the parade the day before, so there seemed to be more people out there. We’re trying like heck to get people to support this,” he said.

Of course, it helps when you have assembled the core of a good parade. And Castinetti said he is satisfied with what was accomplished this year. “I’ve been doing this as council commander for 12 years and marching in this parade for at least 20 years total. And this was probably the longest and biggest parade we’ve had in all of the years I’ve been associated with it,” Castinetti said. “The route was a mile and three quarters or a little longer. And we had everything in it – six floats, four bands, World War II reenactors and all of those classic cars that meet in Fuddruckers in Saugus every Tuesday night – thanks to Guy Moley, who did a great job organizing and getting all those vehicles in here.”

“And, of course, we made history this year. As we were able to get USS Constitution Commanding Officer Billie June “BJ” Farrell here to be the parade grand marshal and our keynote speaker at the Memorial Day Ceremony.”