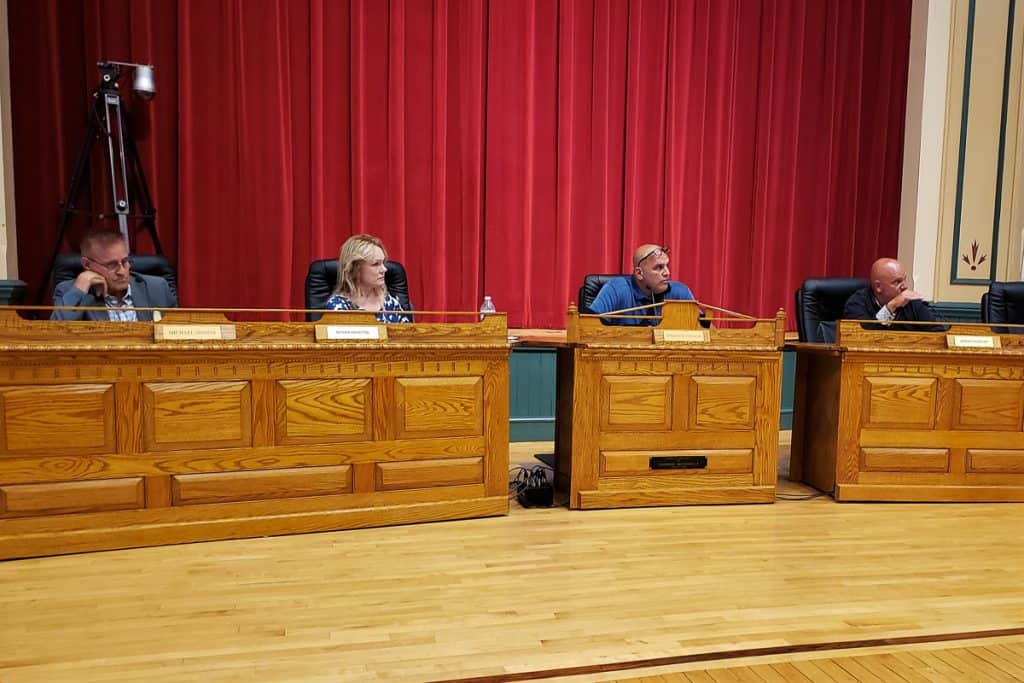 Thermo King Northeast seeks a Special Permit (S-2) in order to obtain a Class C State Inspection Station for tractor trailer trucks on Ballard Street. Selectmen say the only way they would consider granting such a permit is if the company inspects the trucks by appointment only.

Patrick Sullivan, the service manager for Thermo King Northeast, told selectmen at Tuesday night’s (July 12) meeting that his company doesn’t allow “by appointment only” inspections. But selectmen were adamant that they would reject Thermo King’s request for a Special Permit to allow for a Class C State Inspection Station at 121 Ballard St. if the company doesn’t do the inspections “by appointment only.”

Selectman Jeffrey Cicolini said he needed assurances that there would never be a situation of any tractor trailer trucks being on Ballard Street “other than pulling into your lot.”

Cicolini advised Sullivan to consider withdrawing his request because four of five votes are needed for approval of Special Permits. With one member (Selectman Corinne Riley) absent from the meeting, it was clear that Thermo King didn’t have enough support to obtain the permit. And denial of the request would prevent Sullivan from reapplying for at least two years. Sullivan later accepted Cicolini’s advice and withdrew his application without prejudice.

“I would have supported it ‘by appointment only,’” because you could manage the volume [of truck traffic],” Cicolini told Sullivan. But if tractor trailer trucks are allowed to visit without appointment, there is no way to keep trucks from parking on Ballard Street, Cicolini said.

“I spoke to many residents down in that area who are very concerned about the traffic and potential traffic,” he said. “It’s been a disaster traffic-wise for a long time. We have some construction happening down there that’s going to bring more traffic.”

Board of Selectmen Vice-Chair Debra Panetta echoed Cicolini’s concerns. She said she’s heard from many residents on Ballard Street and other streets in the neighborhood who are concerned the inspection station could compound the traffic congestion problems. “It really is a mess down there, and I don’t want to add additional traffic and additional concerns in that area,” Panetta said.

“I feel very uncomfortable [with granting the permit],” she said.

Panetta noted that Thermo King’s request dates back for about a year, with the hearing being continued about five times. “We really tried to work with you,” Panetta told Sullivan.

Selectman Michael Serino said he also had “major concerns” about the potential of compounding traffic woes in the Ballard Street area if selectmen approved the permit. “I don’t think you have enough room to stack tractor-trailer trucks,” Serino said.

“They’re going to end up being stored on Ballard Street,” he said.

Board of Selectmen Chair Anthony Cogliano told Sullivan it was clear he had no support. “Without ‘appointment only,’ this is something we can’t approve. You’re going to get ‘a no’ tonight,” Cogliano said.

Sullivan accepted the advice and withdrew his request “without prejudice,” giving Thermo King the option of returning with a modified request instead of having to wait two years to reapply.