What’s The Benefit to Saugus? 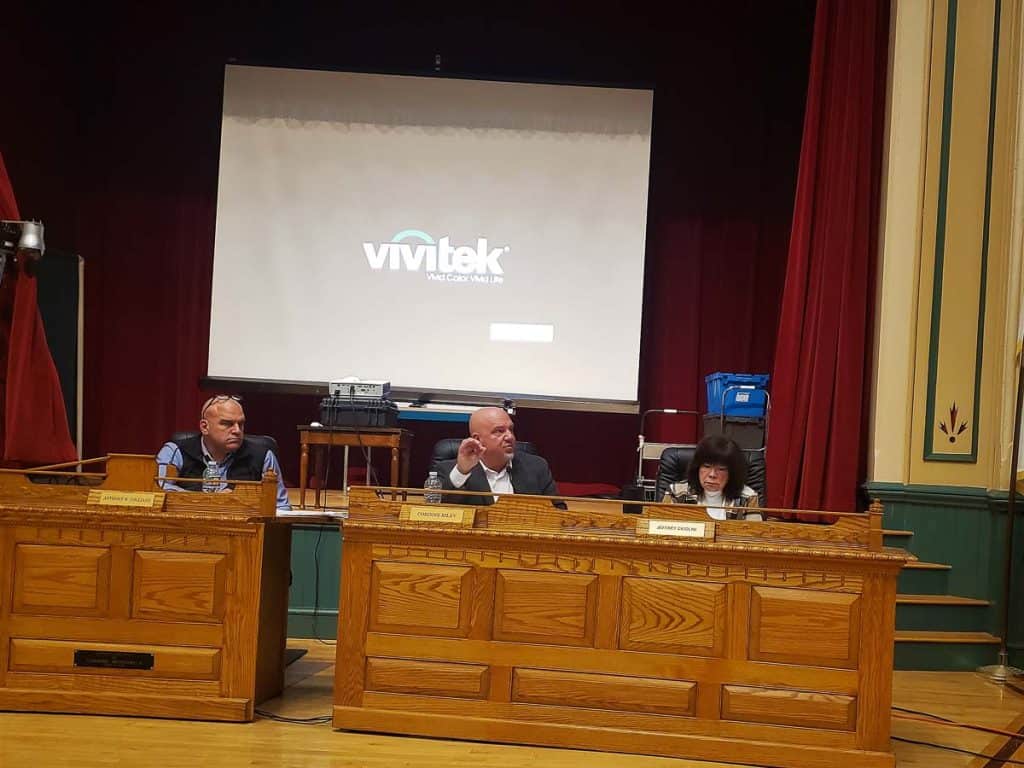 WIN Waste Innovations is willing to accept a revised Host Community Agreement (HCA) with the town that would waive the tipping fee.

But WIN officials want the contingency clause restored to the agreement, which would enable the company to reduce the tipping fee benefit to the town if the company is required to spend more than $5-million in capital improvements to extend the life of the ash landfill.

Reinstating the contingency clause whereby WIN Waste is required to spend more than $5-million in capital payments change from no charge for waste disposal to $2.50 per ton, according to the modified proposed agreement submitted to selectmen at Tuesday night’s public hearing.

“While the reduced term of the agreement and the modification to the financial benefits to the Town of Saugus are acceptable, without the contingency clause the economics of the project are no longer viable, and we are unable to go forward with the changes to the Host Community Agreement approved at the Sept. 24 meeting,” WIN’s Vice President of Environmental Compliance wrote in a Jan. 12 memorandum to selectmen.

But Selectmen Jeffrey Cicolini questioned the financial information calculated by WIN in the company’s latest proposal. “We don’t even know what the value of the agreement would be to the town,” Cicolini said. “The only thing I know is the starting point – that’s the tipping fees,” he said.

Ciconlini said he also wants to make sure that WIN complies with the town’s tax agreement with the company.

Connolly stressed that Capital improvements made by WIN raise the base under which taxes paid by WIN to the town is calculated. He added that this would result in increased tax revenue to the town. Some town officials don’t agree.

A majority of selectmen agreed with Cicolini and the board voted to table the ongoing discussions until WIN provides more detailed data on how WIN’s proposal would affect the benefits to the town.

“When you are ready to present it to us, we’ll call another hearing,” Board of Selectmen Chair Anthony Cogliano said. Cicolini said he hoped that WIN could provide the information within 30 days so the board could proceed with the HCA and not prolong its consideration.

Selectmen last September approved an HCA with WIN Waste Innovations that would enable the company to extend the life of the ash landfill adjacent to its trash-to-energy plant on Route 107 by two decades.

But the amended HCA which selectmen supported by a slim 3-2 vote at the September meeting included substantial changes – including a provision that the Town of Saugus receive free tipping fees for waste disposal over the life of the agreement.

The town currently pays close to $900,000 in annual tipping fees to WIN.

Under Cicolini’s amendment approved previously, the town’s benefits would not be decreased if WIN was required to pay more than $5-million for major upgrades of the plant.

“We were pleased to present a revised proposal that addressed the modifications the Selectmen approved, with language that provides significant economic and environmental benefits to the Town while making the project economically viable,” Connolly said. “We will work with the Town to gather the additional information it is seeking and hope to come up with a path for us to provide those benefits,” he said.

Cogliano and Selectman Corinne Riley voted in favor of Cicolini’s amendment which created the current proposal last September. Board of Selectmen Vice Chair Debra Panetta and Selectman Michael Serino – both staunch opponents of any expansion of the ash landfill – voted against it.

A major obstacle to any deal will be whether the DEP will allow extending the life of the ash landfill. DEP officials have stated repeatedly over the past year that existing environmental laws and regulations do not permit expansion of the ash landfill at the WIN site near its trash-to-energy incinerator on Route 107.

“The financial implications for our Town are not clear in this agreement. I also do not think that our Town should be penalized if capital improvements are needed at the WIN Waste landfill,” Panetta said.

“Remember, they are purchasing emission credits from more efficient facilities so that they can continue to pollute more in Saugus. They cannot get to the 150 PPM nitrogen oxide

standard; and even with this agreement, they will not meet the standard without buying credits,” she said.

“I believe that WIN Innovations should do whatever they can to keep Saugus residents, and our neighboring communities, safe from the poisons from both the fly ash and the ash in the

Landfill,” she said. “Some of the improvement being proposed in the agreement regarding heavy metals in our neighborhoods should be undertaken regardless of a host agreement —- it’s a

public health and safety issues. After all, we do host the oldest incinerator in the nation.”

Ultimately, Town Manager Scott C. Crabtree and the Board of Health would be involved in the ultimate decision on any deal with WIN. “This isn’t something that’s going to happen overnight. We need to have our own strategy,” Crabtree said. “I think they need to come back first with something first that breaks it down into detail,” he said. “There’s a lot of moving parts that definitely have to be looked at,” he said..