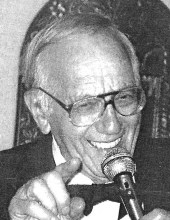 Of Saugus, also known as “Tony Barrie,” died peacefully with his beloved wife Ann by his side on August 28, at the amazing age of 101.

Born in Boston on July 9, 1921, he was the son of the late Anna and Frank Bicchieri.

Tony received his Bachelor of Science degree in Chemical Engineering in 1943 from Tufts University. While there he was also commissioned an Ensign in the U.S. Navy. He went on to work for 44 years as an Engineer at General Electric Company in Lynn where he taught Quality Control and was a supervisor. Tony had quite the musical career spanning over 80 years! He was an accomplished musician playing the violin, saxophone, and clarinet and went on to be the featured singer with many top big bands who regularly performed at popular venues throughout New England.

In 1947 while performing at the Totem Pole Ballroom, he found himself captivated by a young lady dancing with her date. A few weeks later he was introduced to her in the parking lot of the G.E. and 2 years later on October 9, 1949 he married this young lady, Ann Divisione’ the love of his life; and that was the beginning of their beautiful love affair.

In addition to his dance band, Tony also led the Tony Barrie Marching Band which has been performing numerous parades throughout the greater Boston area since 1949. Considered the longest running independent band in the region, the Tony Barrie Marching Band continues performing under great new leadership sharing his enthusiasm for bringing joy to many through music and fun.

Tony loved his musical life and shared countless stories of events he played and the people he met along with way. Tony was truly an entertainer and insisted on motivating the spectators to participate! Whether you were brought into a conga line wearing funny hats, or at a parade where out of nowhere, you were being serenaded by a “happy birthday” song – it was always a memorable event with the Tony Barrie band!

In 2006 at age 85, Tony developed a wound that resulted in an amputation of his right leg. But that never stopped him! Although unable to march, he continued to lead the marching band on the sidelines. Tony continued entertaining up until his 100th birthday where he could be found bringing joy and memories to many at assisted living facilities throughout the north shore. Tony had a zest for life and always wanted to motivate people to LIVE!

In lieu of flowers, donations may be made to St. Margaret’s Church, 431 Lincoln Avenue, Saugus MA.