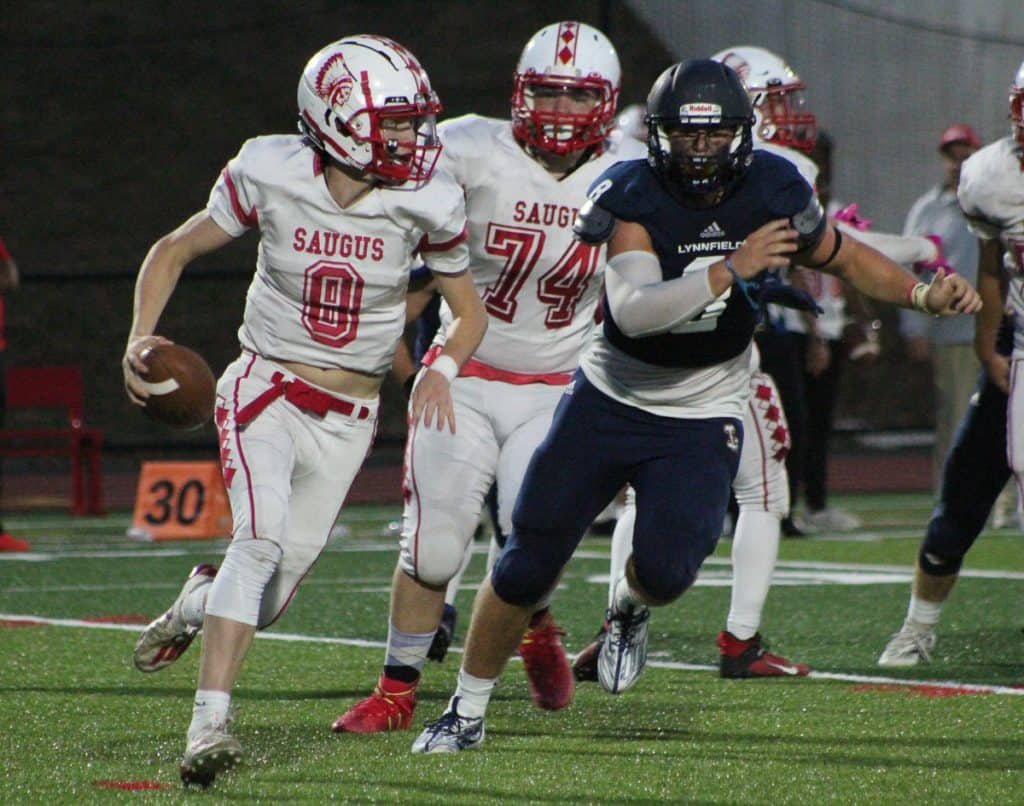 The visiting Lynnfield Pioneers wasted little time in jumping all over the Saugus Sachems in the high school football season opener for both teams last Friday evening at Christie Serino Jr. Stadium. The Pioneers forged ahead by two touchdowns less than five minutes into the game and never looked back in an eventual 37-0 victory. From the start, Saugus found itself in a precarious situation on the opening possession of the game, pinned deep in its own end and having to surrender the ball on downs from inside its own 10-yard line. The ensuing punt ended up being returned 50 yards for a touchdown, and the subsequent extra-point kick produced a quick 7-0 Lynnfield lead.

The advantage increased to 14-0 just minutes later when Lynnfield quarterback Tyler Adamo connected with receiver Joey Cucciniello on a 51-yard scoring play (the Pioneers’ first offensive play from scrimmage). The visitors would tally one more time before the quarter was over to grab a 20-0 lead. From there, it was pretty much clear sailing for Lynnfield, as the Sachems were unable to manage anything on offense. Saugus didn’t achieve a first down in the opening half while the Pioneers notched two more touchdowns to build an insurmountable 34-0 bulge by halftime.

The one first-half highlight for the host Sachems was an interception of a deflected pass by sophomore defensive back Danny Shea that thwarted a second quarter Lynnfield drive. Unfortunately, Saugus’s offense gave the ball right back to the Pioneers by fumbling it away on the ensuing play.

The Pioneers owned the field possession battle, constantly keeping Saugus deep in its own end, and, in the process, creating great field position for themselves. A shanked punt by Saugus in the second quarter led to another touchdown, as Lynnfield took over inside the Sachems’ 20 and marched it in from there.

Offensively, Saugus quarterback Cam Preston faced heavy pressure in the pocket, and the Sachems’ running attack struggled to get going. The Sachems’ defense did acquit itself well in the second half, giving up just one field goal.

Saugus, now 0-1, is looking for its first victory since 2020. The Sachems will look to regroup when they travel to play the Northeast Metro Tech Knights in an unusual 10:30 a.m. game this Saturday. The Knights will be looking for their first win of the season after losing their opener to North Reading last week.