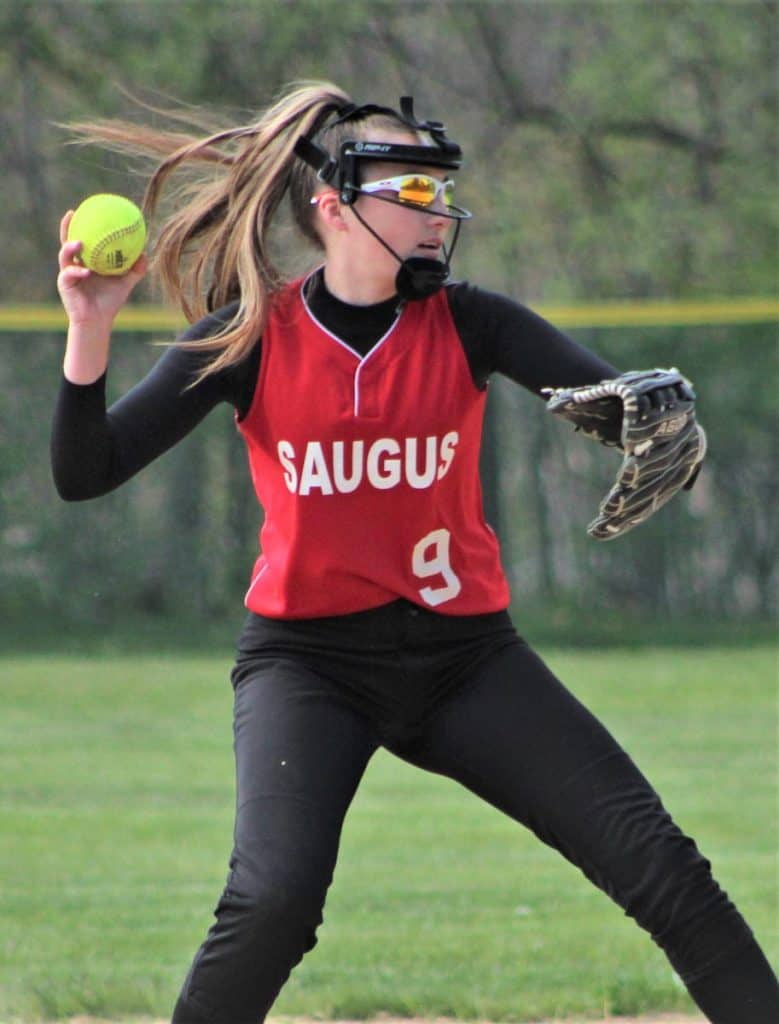 A busy schedule of four games in six days provided a challenge for the Saugus High School softball team. The contests were mostly makeups from earlier postponements and the Sachems came out of the stretch in pretty good shape by winning three of the four matchups.

After losing to Peabody last Thursday, Saugus reeled off three consecutive wins, starting with a 14-8 victory at Melrose on Sunday. The team erupted for 20 hits, including four from Devaney Millerick and three each from Kaitlyn Pugh and Gianna Costa. Millerick socked three doubles while Pugh drove in three runs.

Players with two hits each in the Melrose win were Felicia Reppucci, Ryann Moloney and Felicia Alexander. Pitcher Fallon Millerick got the win on the mound, striking out three in her complete-game effort.

Fallon Millerick homered and earned the win in the pitcher’s circle in Monday’s five-inning 13-3 victory over Salem. Reppucci drilled three hits and had three RBIs, followed by Taylor Deleidi with three hits and Costa with three knocks as well.

Saugus completed the stretch with an impressive 18-3 win at Swampscott on Tuesday – a win that qualified the Sachems for this year’s playoffs. It improved Saugus to 10-6 overall.

Sachems Head Coach Steve Almquist told the press after the game that he wasn’t anticipating a postseason bid from his young squad this season. “With a young team like we have, you’re hoping you’re just going to win five games, let alone 10,” he said. “It’s truly a credit to the girls, the talent they have and the hard work they’ve put in this year.”

Catcher Lily Ventre, who had been out with an injury for much of the season, returned with a vengeance by going 4-for-4 with two doubles and seven runs batted in. Ava Rogers and Devaney Millerick both socked two hits and drove in two and Pugh drilled a hit that brought home two runs. Costa also had two hits and an RBI and Fallon Millerick, who earned another pitching win, her ninth of the campaign, stroked a double,

With a playoff spot already clinched, Saugus moves on to host a second matchup against Swampscott in its Senior Day game Friday and then plays at Danvers next Monday, May 23.  The Sachems return home to host Melrose next Tuesday, May 24.