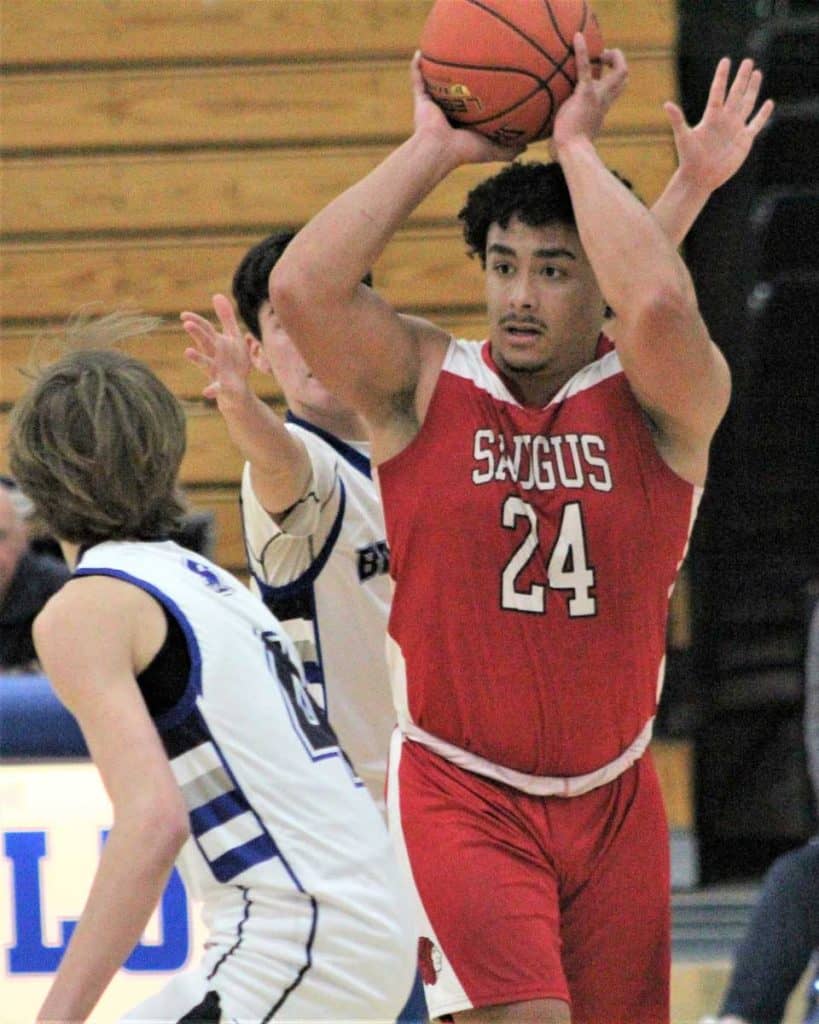 Facing a program that won 17 games last season appeared to be a major challenge for the Saugus High School boys’ basketball team entering its 2022-23 season opener at Swampscott Tuesday night. As it turned out, the Sachems were up to the task and ended up pulling off an impressive come-from-behind 59-54 victory.

Saugus trailed by four entering the fourth quarter before outscoring the host Big Blue by nine points over the final eight minutes to come out on top. Cam Soroko produced a strong effort, connecting on four three-pointers and finishing with a team-high 16 points. Saugus hit some key shots down the stretch, led by Soroko, Isaiah Rodriguez (10 points), Ben Tapia-Gately (eight points), and Isaiah Garcia (eight).

Saugus got off to a fast start and led 18-9 at one stage of the first quarter. Swampscott then went on a 13-0 surge to take a 22-18 lead early in the second period. But a basket from beyond the arc by Soroko and a hoop from Braden Faiella helped stem the Swampscott run and kept Saugus within a point at 27-26 at halftime.

Four points from Max Anajjar, Tapia-Gately, and Soroko keyed the strong start for the Sachems, who led 18-14 after the first quarter.  Doing solid work on the boards were Tapia-Gately with eight rebounds, Anajjar with six, and Garcia with five.

Tapia-Gately also dished out nine assists while Anajjar finished with four assists and seven steals, to go along with his seven points. The 1-0 Sachems are scheduled to host Winthrop this Friday at 7 p.m. at the Saugus High gym. They are then back on the road Monday for a contest at Lynn Tech.

Tuesday’s win had to be a confidence-booster for head coach Joe Bertrand and the Sachems, who defeated a Swampscott team that scored 17 victories, advanced in the playoffs and were a highly-rated squad last season. Saugus did not qualify for the postseason in 2021-22.

The Saugus High School girls’ basketball team under head coach Mark Schruender held on to win its season opener at home Tuesday night. The Sachems stormed out to a big 26-9 lead after the first half but had to weather a strong comeback by Swampscott to come away with a close 36-33 triumph.

The 1-0 girls travel to play Winthrop this Friday and resume action next week when they host Triton Regional on Monday (scheduled 7 p.m. tipoff).