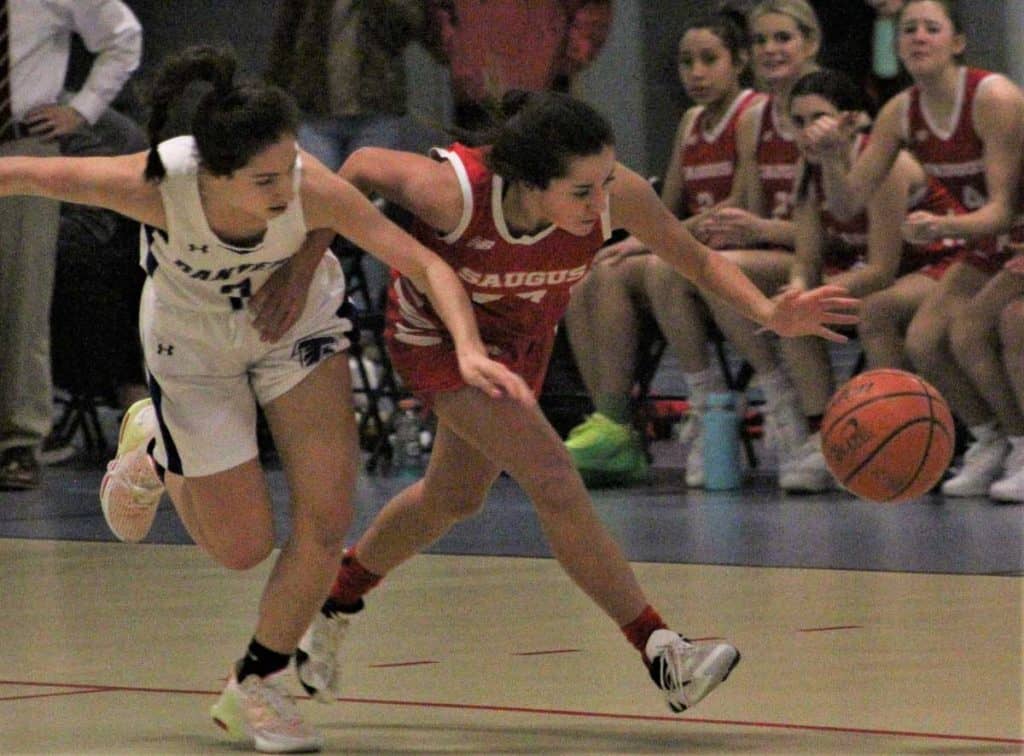 Coming off a loss three days earlier, the Saugus High School girls’ basketball team returned to the win column with an impressive road victory against the Danvers Falcons Tuesday night. Freshman guard Peyton DiBiasio helped lead the way with an explosive 30-point performance in a 53-34 triumph.

The win was the sixth of the season for the Sachems, now 6-4 overall. Saugus had suffered a 57-36 loss at home to Masconomet last Friday – a contest where they trailed by just four points at halftime but struggled to score in the second half, getting outscored 30-13.

A similar scenario played out over the opening 16 minutes on Tuesday against the Falcons. The Sachems were behind by a 13-12 count through one quarter but had difficulty with their shooting and managed just five points in the second period. Still, on defense they held the hosts to just eight points in quarter two and trailed by a 21-17 margin at the half.

Saugus went on a run to begin the third quarter due to an effective full-court pressure defense. “It was a much closer game than the [final] score will tell,” said Saugus head coach Mark Schruender after the game. “In the third quarter, we had a group on the floor of Taylor Deleidi, Madison Botta, Devany Millerick, DiBiasio and Madelyn Femino. That group came up big, getting defensive stops, offensive rebounds, and giving our whole team energy that carried into the fourth quarter.”

Nearly half of DiBiasio’s output came from the free-throw stripe, where she shot a perfect 14-for-14. “I’ve never seen a player make that many free throws in a row at this level,” Schruender noted.

Also coming up big offensively for the Sachems was Ashleigh Moore, who drilled two important three-pointers in the second half. The Sachems host Swampscott on Friday night and then travel to take on Beverly next Tuesday.