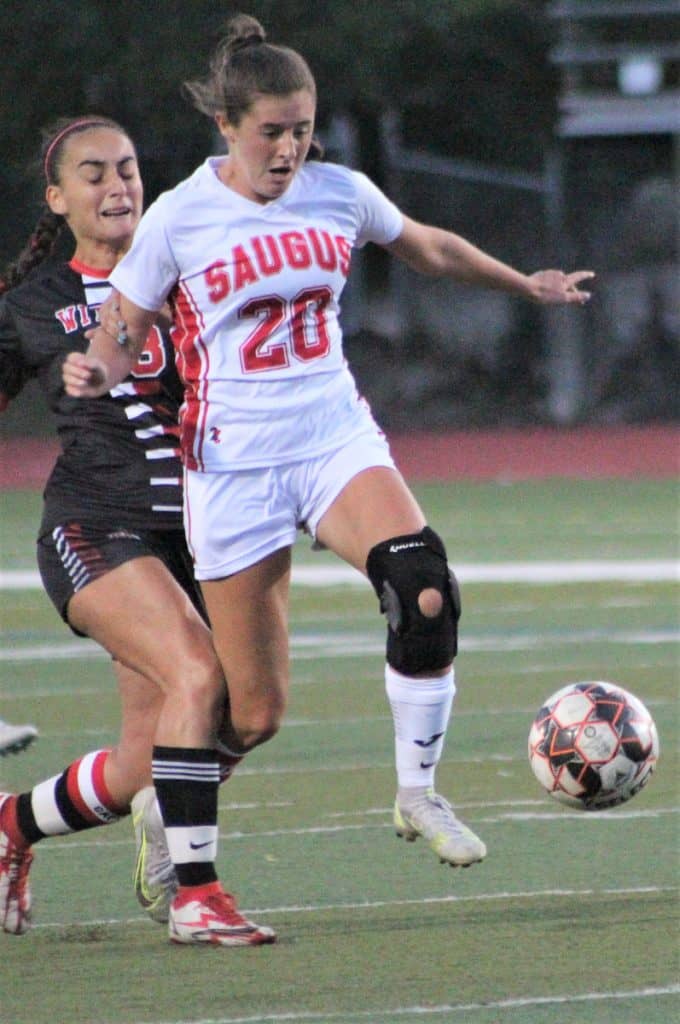 Having already gotten four games into the 2022 season, the Saugus High School girls’ soccer team has pulled out to a strong start. A four-goal outburst in the first half helped propel the Sachems to a 6-0 win over the Salem Witches on Wednesday evening at Bertram Field in Salem.

The victory improved Saugus to 3-1 on the early season. All three triumphs have been resounding offensive efforts. In their other two wins, the Sachems defeated Winthrop, 7-0, in the season opener last Wednesday and pounded Gloucester, 7-2, last Friday. The team’s lone loss was a shutout setback against Masconomet on Monday. With 20 goals to their credit through four contests, the Sachems are looking like a squad that could supply plenty of offensive punch this fall.

On Wednesday, Saugus was coming off a tough defeat at home to Masco earlier in the week. Madison Botta opened the scoring less than five minutes into the Salem contest when she took a feed from fellow forward and co-captain Madi Femino and put one in the back of the net for a quick 1-0 lead. It became a 2-0 game just minutes later as Botta returned the favor and assisted on a score by Femino. With about 19 minutes left in the first half, Olivia Migliori scored off an assist from Shawn Sewell for a 3-0 edge. The Sachems dented the net one last time before the half when Julianna Powers took a pass from Migliori and hit paydirt for the team’s fourth tally.

The Sachems scored twice more in the second half. Co-captain Allison Justice made a nice pass to Botta, who broke in on goal and scored for the second time. Justice would collect a goal of her own when she was later awarded a penalty kick and converted to account for the final margin.

The host Witches never really threatened offensively and spent very little, if any, time in Saugus’s end. Meanwhile, the Sachems dominated territorial play. Sachems Head Coach Chris Coviello praised his team’s effort with ball possession and how it was able to control the game up the sidelines. He credited freshmen Natalie Justice and Shay Sewell with strong performances in this area.

Goalkeeper Tori Carter didn’t have to face much in the way of shots but did earn her second shutout in goal for the Sachems, who aren’t scheduled to resume action again until next Wednesday when they host Marblehead at Christie Serino Jr. Stadium (4 p.m. start).

Along with Femino and Justice, defenseman Lexi Rais is also one of this year’s team captains. Rais and sophomore Layla Manderson helped patrol the defensive end and keep the Witches at bay in Wednesday’s win.