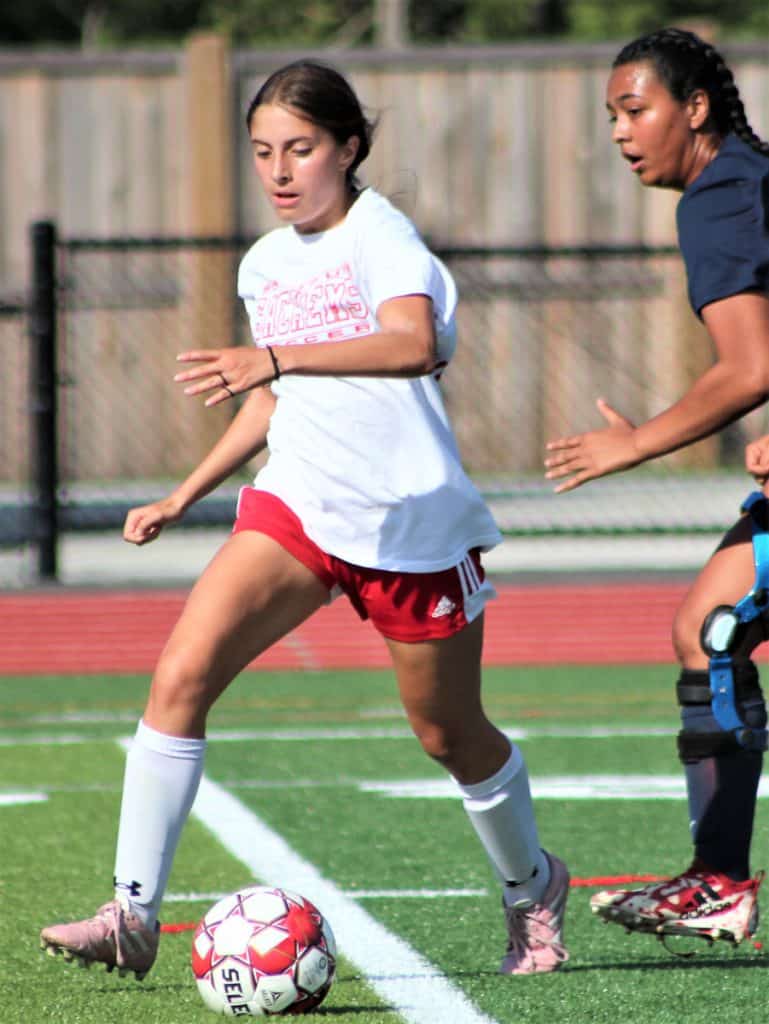 Coming off a season in which it notched a memorable comeback victory in the playoffs, the Saugus High School girls’ soccer team is on the cusp of 2022, sporting a mostly young but eager squad. The Sachems battled hard against St. Mary’s of Lynn before succumbing, 5-3, in an entertaining preseason scrimmage game on Wednesday afternoon at the Christie Serino, Jr. Memorial Athletic Complex.

This season, Saugus will be led by players senior Allison Justice, junior Veronica Ortega and sophomore Layla Manderson, to name a few. The Sachems are scheduled to open the regular season next Wednesday, Sept. 7, at Winthrop and then host Gloucester at Anna Parker Field on Friday the 9th.

Having lost several key players to graduation from the 2021 campaign, a contingent that included forward Jordan Morris and Felicia Reppucci, this year’s Sachems are hoping to build on their 11-9 season last fall. One characteristic of last season’s team was the penchant for scoring one-sided victories while coming up short in the lower-scoring, closer contests. That trend did not apply to the postseason, where the 32nd-seeded Sachems pulled off an exciting, come-from-behind, 2-1 win at Sandwich in the preliminary round of the Div. 3 tournament. Saugus went on to lose in the next round, but the tone for this season may have been set by experiencing some playoff success last fall.

For the Saugus boys’ team, the goal will be to try and earn a spot in the postseason tourney. The Sachems just missed making it to the tournament last year. Despite the fact that they finished 5-13 overall, they still had a chance to earn a tourney berth in the final days of the regular season but missed out.

The Sachem boys scrimmaged Ipswich on Wednesday and open the regular season when they host Winthrop next Wednesday, Sept. 7 (scheduled 4 p.m. start) at the Athletic Complex. They follow that up with a road tilt against Gloucester next Friday, Sept. 9.